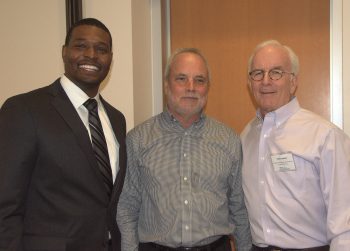 The summit, titled Sound Economic Development: Creating a Rising Tide for the North Carolina Coast, made apparent the passionate and bipartisan state support for these efforts, as well as the need for collaboration on regional economic development strategies that leverage North Carolina’s coastal assets.

The summit kicked off with a series of speakers talking about their support — past and future — for oysters in North Carolina.

Michael Regan, secretary of the N.C. Department of Environmental Quality, welcomed the crowd and confirmed the department’s and Gov. Roy Cooper’s endorsement of efforts to restore oysters and bolster the state’s shellfish aquaculture industry. Regan said that he has long believed environmental restoration and economic prosperity do not need to be mutually exclusive.

“That’s the great thing about oysters and coastal restoration — there’s a little bit of something here for everyone,” Regan said.

Sen. Bill Cook (R–Beaufort) also offered opening remarks, encouraging North Carolina’s ability to eventually outpace Virginia in the oyster industry. He said he is often called the “oyster man” in the state legislature for his continued support of oysters

Tom Looney, who is a board member for the federation and EDPNC, as well as other groups, kept the summit running by introducing speakers and summarizing main points from various panels. Looney spoke on his own experiences early on in the summit, noting that North Carolina can become the “Napa Valley” of oysters (a term coined by author Rowan Jacobsen, who attended the summit) and the “Silicon Valley” of aquaculture (a term coined by Looney).

Key conclusions from the summit:

Using momentum from the summit as well as supporting the ongoing work, North Carolina should take these next steps to move forward:

Below are summaries of the presentations and panels: 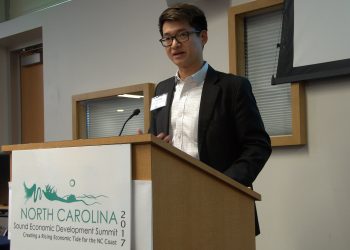 Chung spoke about how important it is for regions to development economic strategies that work with the assets that they have. He said believes the state’s coastal counties are on the right track with pursuing coastal restoration and aquaculture, as North Carolina does have the assets and resources it needs to build its oyster industry. Attracting large business is not always the right path forward for every county, and these coastal counties need to look at what infrastructure they need to create a viable economic strategy for the assets they have. EDPNC’s main goal is to sell North Carolina, and Chung said it is willing to help grow the oyster industry.

Gray’s presentation focused on middle income occupations that could be plugged into the marine aquaculture economy. Some of North Carolina’s coastal counties are still struggling post-Great Recession, and technology induced job loss is continuing to happen. Agriculture and manufacturing will be two of the hardest hit sectors by this job loss — by 2040, an estimated 112,230 jobs will be lost with $2.8 billion in wages lost (this does not factor in new kinds of jobs). Growing the mariculture industry is a good way to fill the gap when these jobs are lost to technological innovations and for eastern North Carolina, the economic importance of the mariculture industry is huge. 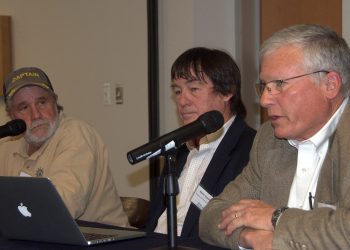 Virginia is the top oyster producer on the East Coast. Leggett, Luckenbach and Wesson spoke on why Virginia has had the success in oyster aquaculture that it has and what problems still remain. They said that aquaculture is the future for oysters and that wild harvest will never be able to get back to historic levels. That being said, there needs to be more work done to develop hatcheries to combat decline seed supply, and the leasing system could use improvement, as a few bad leases have led to poor perception. Some waterfront property owners also do not want to see aquaculture in front of their homes. Overall, they agreed that the bottom line keys to the state’s success were a good lease system, supportive state agencies, research into triploid oyster development/disease resistance, timing with the collapse of the oyster industry in the Gulf of Mexico and marketing. 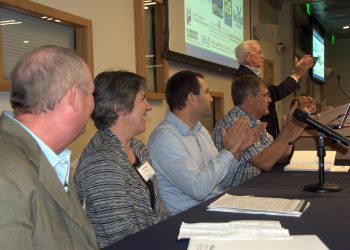 Eliminating the Barriers to Entry and Building a Shellfish Aquaculture Industry
Outlined by Tom Looney, Board of Directors, Economic Development Partnership of North Carolina

After hearing about Virginia’s successes and struggles, a group from North Carolina talked about how to make it easier to get the industry going in the state, as well as what problems still need to be overcome. Some of the key agreements and takeaways from this panel include: a need for hatcheries in North Carolina, a need for more industry-specific training for those looking into shellfish aquaculture, a need for more market research and branding and a need for a better lease program and a group that is responsible for creating a comprehensive shellfish aquaculture plan and for overseeing mariculture issues as they arise.

Outside of oyster aquaculture, just the act of restoring oyster habitat has huge economic benefits for the North Carolina coast. This kind of restoration provides jobs during the work, and it also helps out tourism, as oyster restoration helps clean water and provide home for recreationally important fish. Panelists agreed that public-private partnerships are important, citing a 2009 project that involved the federation, state agencies, universities and companies included Stevens Towing to build more than 60 acres of oyster sanctuary. Funding will be critical in continuing this kind of work.

This plan can be viewed at nccoast.org/strategicplan. Created in partnership with many stakeholders, it will guide economic growth on the North Carolina coast for the next five years. Miller said taking advantage of funding from the farm bill will be important moving forward. Despite having the eighth largest agricultural economy, North Carolina ranked 49 out of 50 in farm bill funding. 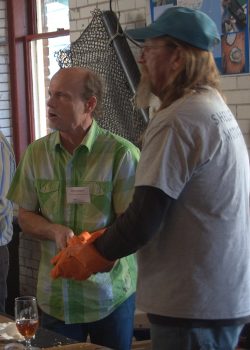 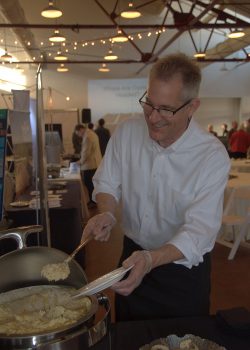 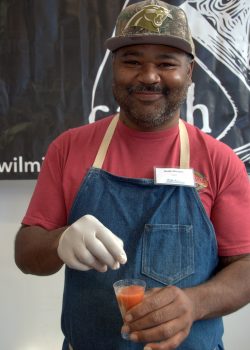 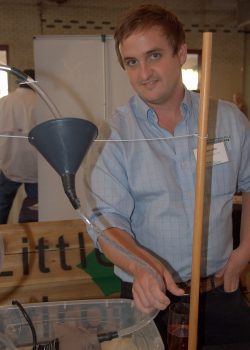 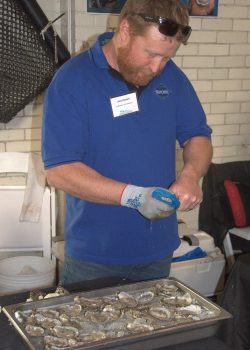 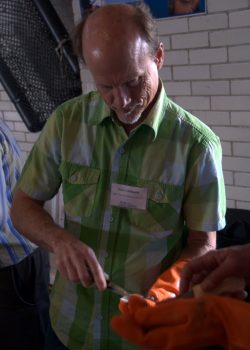 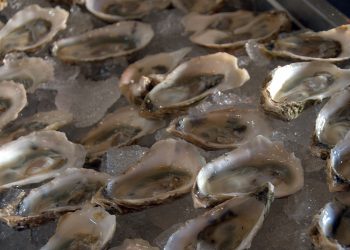 Oysters provided by a grower at the Legislative Oyster Reception on March 22 in Raleigh. 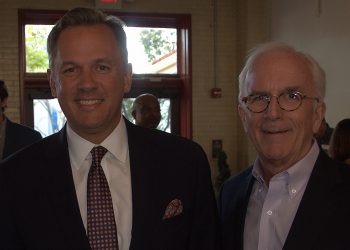 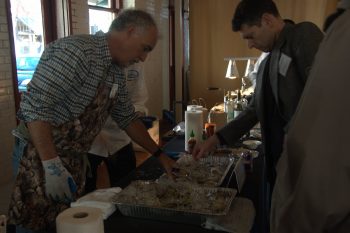 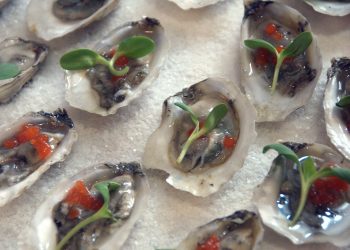 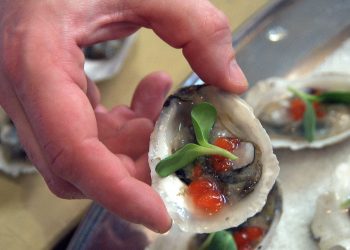 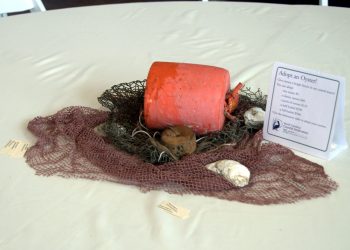 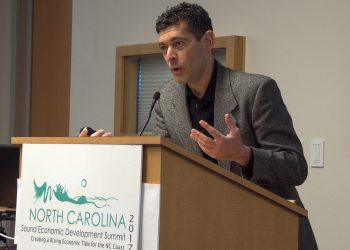 Rowan Jacobsen, author of The Essential Oyster provided opening remarks for the day.

Jacobsen talked about how oyster bars are starting to become very high-end, much unlike the he traditional oyster bars. He also talked about how variety is key — people want to see the difference between the oysters they’re trying. North Carolina oysters are becoming more common in restaurants, and he noted how Coastal Provisions in the Outer Banks carries around six on a typical night. As far as marketing oysters, other states invented oyster trails, and it’s also important to think about the economic value of festivals. He said some of the biggest festivals on the East Coast can bring in up to 50,000 people. North Carolina has the habitat and the diversity of oysters to market many different kinds, including “heirloom” oysters that are unique to the area. He said these heirloom products are reasons not to forget about the importance of wild oyster populations. Wild populations have much more variance than ones ordered from hatcheries, which are all part of the same genetic stock. 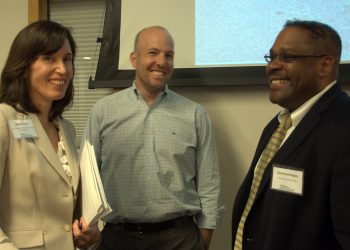 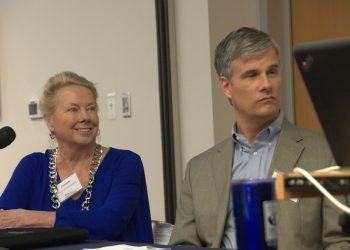 The wrap-up panel talked about the importance of regional economic strategies and developing an aquaculture plan. Miller said the efforts to boost the economy through coastal restoration requires people who can think about it everyday. He also stressed the importance of communication and incorporating solid science into an aquaculture plan. White agreed and also said that it will be important to bring in stakeholders from the community and academia. The group talked about the oyster steering committee, and Best said the group is very strategic in their planning. Kelly talked about the importance of identifying coastal resources and restoration projects as a type of infrastructure, because they are more likely to get funding and support.