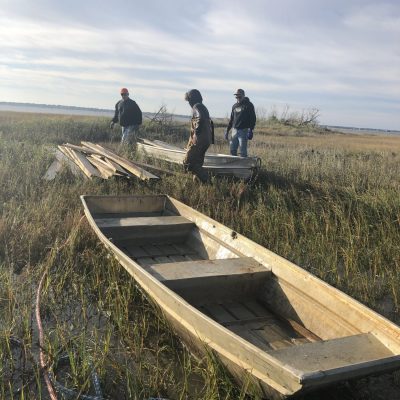 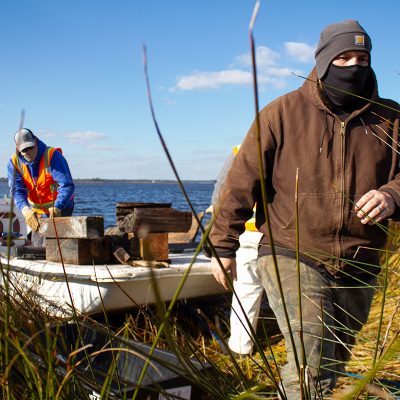 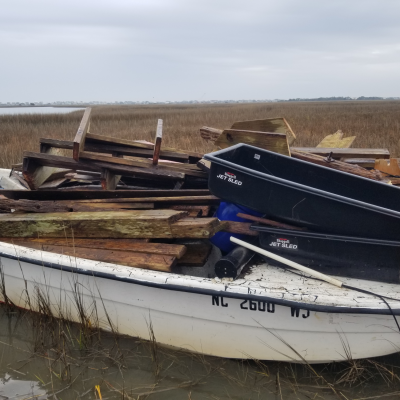 In the wake of several devastating hurricanes, including Hurricane Florence in 2018, stakeholders developing the Marine Debris Action Plan for North Carolina began focusing on the significant number of abandoned and derelict vessels (ADVs) and marine debris deposited by the storms in our estuaries, islands and wetlands. The debris, made up of materials from docks, piers, houses and other coastal structures included pressure treated and creosote lumber, plastic and polystyrene floats, building materials, household trash and lost fishing gear. The need for large scale, coordinated cleanups became very apparent, the first project was launched in 2019.

Marine Debris Removal in the Central and Southeast Regions

In 2020, the Coastal Federation in partnership with the Division of Coastal Management (DCM) continued the large-scale hurrican marine debris clean up from Carteret to Brunswick County. The U.S.D.A and the Natural Resource Conserbation Service’s (NRCS) Emergency Watershed Program Provided  about 1,9 million in funding that was matched by about $500,000 from state appropriations to DCM to clean up marine debris from Hurricane Florence that still litters North Carolina coastal habitats. This funding also addresses abandoned and derelict vessels littering the coast. The project focuses on cleaning up debris from the public trust waters, lands and dredge spoil islands in and around the Rachel Carson Reserve, Hammocks Beach State Park, Permuda Island and Masonboro Island Reserves, their respective counties and Brunswick county.

Over 30 commercial fishermen and women, working in crews of 3-4 people with small skiffs have been scouring the coast for luber, floats, polystyrene, piling and other debris from waterfront structures. The debris is collected by hand and loaded into dumpsters for disposl. Each crew picks up an average of 2,000 pounds (1 ton) of debris each day. Houshold debris and consumer trash only make up about 10-15% of the debris being found.

Donovan Smith, supervisor for the central region crew shared, “I couldn’t believe how much debris is out here. It would be great if we could cleanup all down the coastline. I’m a commercial fisherman on the side, so it’s important to me to keep the water clean. All the debris, trash and pollution is not good for wildlife, fish and oysters. It’s not good for anything.”

“People should really pay attention to how these things are being built and maintained along the coast. It probably would be cheaper for the property owner and the public to build these more solid than to repace them with every storm”, said southest field crew leader Joe Huie.

Added to the tons of debris are the many Abandoned and Derelict vessels (ADVs) that were scattered all along the coast during hurrcanes and tropical storms Mathew, Forence and Michael. Vessel removals began in March 2021 and are focused on the ADVs from hurricanes Florence and Matthew. Moran Environmental Recovery Commercial Diving Division is contracted for these removals along with several local subcontrators and local crews of fishermen.

The National Oceanographic Atmospheric Administration (NOAA) Marine Debris Program is supporting the federation’s work with marine contractors and local municipalities to create model building codes and construction specifications to ensure docks and piers are built stronger to better withstand the forces of future hurricanes. For future preparedness, the Federation is also working with NOAA to develop best management practices and a case study on large-scale marine debris removal for distribution by NOAA for other regions. This funding also supported additional debris removal from Pender, New Hanover and Brunswick Counties. A four-person crew of fishers from Sneads Ferry collected 115 tons of debris from Topsail Sound and Middle Sound between November 2019 and May 2020. An additional 1,000 lbs. of debris were collected by volunteers during clean up events at the Morris Landing Clean Water Preserve on Stump Sound.

Click here to read more about the project from the crew’s perspective.

In 2019 the North Carolina General Assembly provided $400,000 in funding to the NC Department of Environmental Quality to remove Hurricane Florence debris in Carteret and Onslow Counties. The project focused on consumer debris, and heavy wooden debris from damaged docks and piers that had washed up after Florence. During 6 months, crews of fishermen and women and locals worked tirelessly by hand and using small boats to clean up 43 miles of marsh and dredge spoil islands along the Intracoastal Waterway near Swansboro, the lower New River and Stump Sound. Over 200 tons of consumer and wooden debris from Hurricane Florence was picked up, along with three abandoned and derelict vessels. In order to maintain habitat quality and not cause disturbance to the surrounding marsh vegetation, the crew members hauled out wood by hand to piles that the contractor could reach with heavy equipment from the waterway.