The North Carolina Coastal Federation hosted a number of Earth Day activities last week in each region. Although the federation celebrates our planet and our coast every day, a little extra celebration occurred during the weeks leading up to and following Earth Day.

The Wanchese office celebrated Earth Day by participating in the Earth Fair OBX VII event at Dowdy Park in Nags Head on April 27. The annual event brings together a variety of organizations to help the public learn about environmental protection. The theme of this year’s Earth Fair was Positively Protecting Habitats. 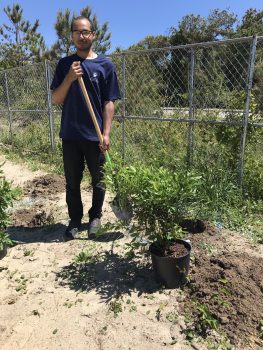 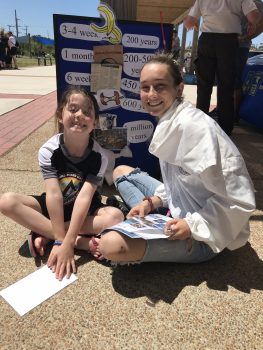 The Town of Nags Head and Dare Soil and Water also teamed up to do some plantings onsite at the park during the event. They planted a total of 18 wax myrtles as part of ongoing conservation efforts at Dowdy Park.

The federation’s exhibit focused on marine debris with an array of typical pieces of litter and a timeline of how long each takes to decompose. Participants had to match up the items with the appropriate lengths of time.

“The federation’s Wanchese office is grateful to take part in this annual event and celebrate our coast,” said Sara Hallas, coastal education coordinator in the northeast region. 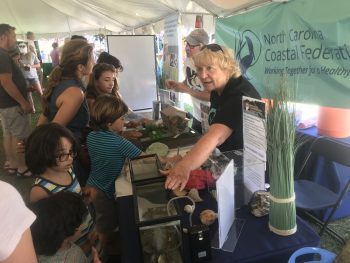 The first event that the Wrightsville Beach office participated in took place on April 18 at Oaks Island’s Earth Day Festival. The event was full of conservation groups and organizations committed to protecting our planet. The southeast office brought their EnviroScape to the festival which is a hands-on, interactive demonstration of the sources and effects of water pollution. It allowed them to easily demonstrate how stormwater runoff carries pollutants through the watershed to a pond, lake, river, bay, or ocean and show the best management practices to prevent this type of pollution from occurring. This demonstration above all helps effectively communicate and educate children of all ages about the watershed and stormwater runoff happening in their communities.

The second event was Cape Fear Community College’s Annual EarthFest that was held on April 22. The event had media coverage from WECT and featured live music, free pizza and refreshments, tie-dye shirt station, free raffles and much more. Several sustainability-focused community organizations and Cape Fear Community College clubs were there to educate students on the importance of protecting the environment.

“I was really impressed with the students from the Student Government Association that sponsored this fun event. I saw an amazing response from the students there. Most everyone I spoke with had a great desire and passion to help their environment,” said Bonnie Mitchell, coastal outreach specialist in the southeast region. 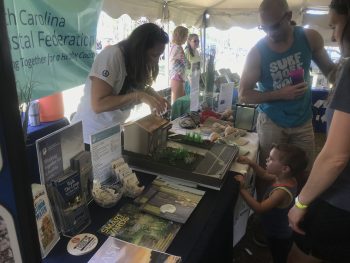 The final event was held on April 27 at Wilmington’s Earth Day Celebration. This event had more than 75 exhibitors in attendance, all involved in some type of environmental issue or resource. The theme was “Change your Actions, Change the Planet” and the organizers of the event, Earth Day Alliance, worked very hard to make sure the event followed that theme and attempted to make it a ZERO-WASTE event. New Hanover County Environmental Management and Wilmington Compost Company collected food scraps from the event plus food brought in from the public to compost.

The federation’s table included a display of live oysters that were caught from the Intracoastal waterway that morning and released back later that same day. Seawater collected from the waterway was poured in two separate tanks and a small clump of oysters was placed in one tank.

Within an hour the oyster had already significantly filtered the water which demonstrated to people of all ages the incredible filtration system oysters possess. The federation also had a rain garden house on display that showed the effects of stormwater runoff and how we can prevent them in our own home which will not only help protect and restore our oyster populations but our whole coastline. 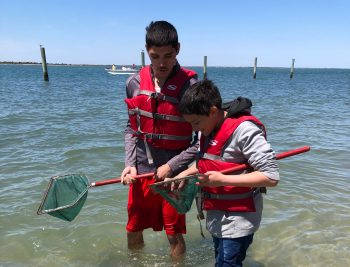 On April 23, the federation hosted a field trip for the Boys and Girls Club at Cape Lookout. This field trip was part of a lesson plan with the federation and the Duke University Marine Lab to educate the Boys & Girls Club of the Coastal Plain – Beaufort Teen Unit on the importance of keeping our coast clean. Read more about their experience here.

On April 24, the federation had a rain garden planting with Swansboro Middle School students at Swansboro Town Hall. Approximately 25 students from Swansboro Middle School helped plant and add mulch to a newly constructed rain garden. The students discussed rain gardens and how they reduce polluted stormwater runoff by collecting and filtering rainwater. They then planted several species of native flowers, grasses and shrubs before adding a layer of mulch.  Students also toured other stormwater solutions surrounding town hall, including a permeable parking lot. The parking lot and rain garden project help implement Swansboro’s Watershed Restoration Plan with funding from the EPA Section 319 Grant Program. Project partners include Onslow County Soil and Water and the Town of Swansboro. 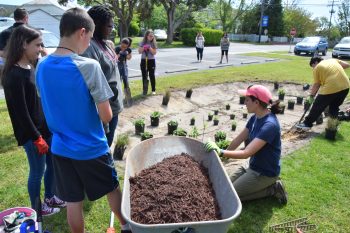 The federation also participated in the Crystal Coast Earth day event on April 27 at Fort Macon State Park. Staff set up a table alongside several other community organizations and spoke to an estimated 200 park visitors and share information on oysters and living shorelines.

“I’m thankful we had the opportunity to be involved in several special projects this Earth Day week. It was great to meet with different student and community groups and share how we can all work together for a healthy coast and environment,” said Rachel Bisesi, coastal education coordinator in the central region.