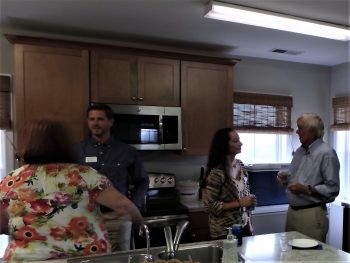 The North Carolina Coastal Federation’s northeast regional office opened its doors this past Friday and welcomed the public to celebrate the one-year anniversary of its current office location in the Wanchese Marine Industrial Park.

Several dedicated volunteers and members stopped by to welcome new staff members, Michael Flynn and Reilly Kelly. Flynn, who is the new coastal advocate, started at the federation in September. He works to increase public awareness of and engagement in coastal issues that relate to the federation’s mission. Flynn is also pursuing a doctoral degree in coastal resources management from East Carolina University.

Kelly started as an AmeriCorps member at the office. She has a Bachelor of Science in biology from Mary Baldwin University.

Attendees engaged with staff members and discussed upcoming initiatives and events they planned on participating in. Guests of the event also shared stories about their summer adventures and enjoyed the musical accompaniment of Marshy Bramble. 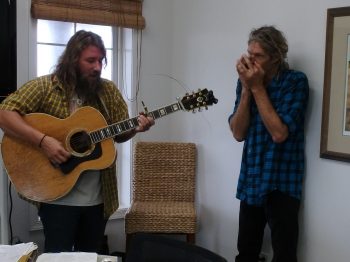 Guests enjoyed the music of Marshy Bramble (Barry Wells on guitar and Richard Byrd on harmonica).

The federation officially opened its Wanchese office with a ribbon cutting ceremony last September. At the Wanchese location, the federation’s staff works alongside commercial fishermen, recreational boat-builders and fishing suppliers — some of the people and businesses that most rely on clean waters.

Since opening the office, staff has hosted several events there, including Marine Debris Awareness Day in April and a field day for Mano al Hermano students and their families in August.

The federation is grateful to all the support that made the move possible, and staff members have enjoyed their first year in the new space.