Private shorelines a priority for federation in 2017, 2018

Throughout 2017, staff members have been focused on designing, permitting and building more than 1,700 linear feet of living shorelines on private properties.

These private shorelines are being installed through the federation’s cost share program, which is funded by the half a million dollar Coastal Ecosystem Resiliency Grant from the National Oceanic and Atmospheric Administration. This grant was awarded in 2015 and has funded both private and public shorelines up and down the coast.

The 1,700 linear feet of private living shorelines are made up of 4,002 plugs of salt marsh plants and oyster shell bag sills and marsh toe revetments. They were built on 11 properties in Bogue Sound, the White Oak River, Hawkins Creek and the Neuse River.

The cost share program has also allowed the federation to train Josh Merritt, Bas Kimlinger and Grainger Coughtrey, tree planting contractors from Carolina Silvics. Prior to working on living shorelines, the federation partnered with Carolina Silvics for more than ten years to plant marsh grasses and trees at the North River Wetlands Preserve.

Merritt, Kimlinger and Coughtrey were trained in early summer 2017 to assemble and deploy oyster shell bags, which has significantly increased the federation’s productivity. They spend a few days at the federation every two weeks. Coughtrey noted that they bagged 550 bags of recycled oyster shells in just one day. 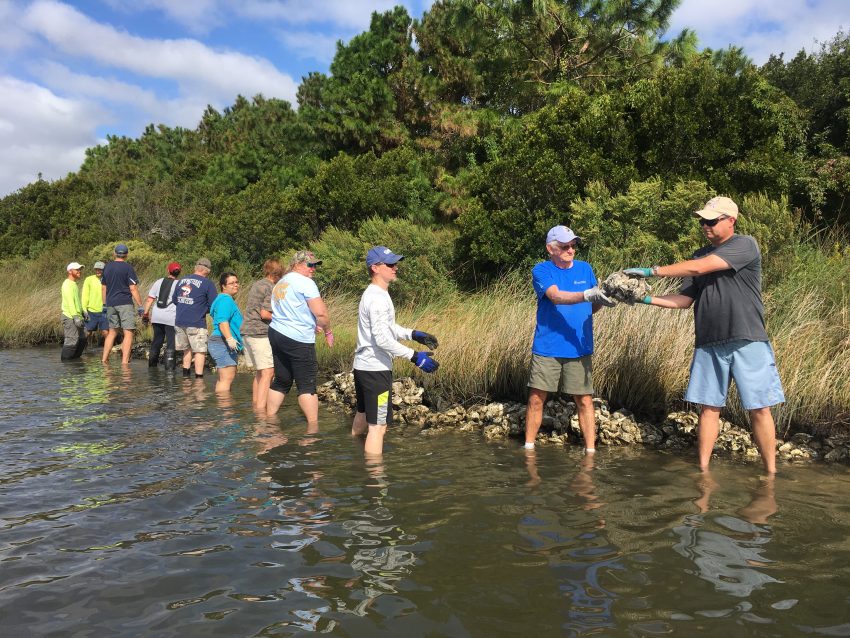 Volunteers have been vital members of the federation’s team this year, as they provide a lot of support on living shoreline volunteer workdays.

“As soon as you put one out, the neighbors on both sides come over and they’re like, ‘what are you doing, how much does this cost?'” Kimlinger said.

“I don’t think we’ve had a site where we’ve started putting them out and a neighbor hasn’t come out and requested to put them out on their property,” he said.

Dean Barnes, a marine contractor with Mud Bucket Dredging, has had similar interactions. He described one situation when he was working on a bulkhead and a homeowner from a neighboring property began inquiring about the bulkhead. When Barnes noticed grass growing on his shoreline, he suggested a living shoreline instead.

“I told him that that standing grass he had was as good as what we were doing,” he said. “And so he was really interested in it, but he’s also losing his toeing out there in front of this grass. And I told him that he should consider the sills.”

Barnes said he gave the homeowner more information about the Living Shorelines Academy, an online resource that educates waterfront landowners on steps they should take if they are interested in building a living shoreline.

Work on private shorelines will continue through the end of the year and into 2018. As part of the cost share program, additional projects are planned for Edenton, Oriental, Duck Waterfront Shops, Moor Shore Road in Kitty Hawk and the Newport and White Oak rivers.

Stay updated on the federation’s living shoreline work at nccoast.org/livingshorelines.