OCEAN — The North Carolina Coastal Federation received $1.088 million in funding from the National Oceanic and Atmospheric Administration to continue its oyster restoration work in Pamlico Sound. Construction on the second phase of the project is slated to begin next January.

This is the second year the federation has received funding from NOAA’s Community-based Restoration Program for its oyster restoration work. Last year, it was awarded a $1.275 million grant. By the end of the three-year period, the federation could receive up to $3.8 million for oyster reef construction. This funding supports the federation’s goal to build 50 acres of oyster reef statewide through its 50 Million Oyster Initiative.

Matching state budget appropriations from the North Carolina General Assembly have helped the federation receive this federal grant funding in 2016 and 2017.

State senators Harry Brown, Bill Cook, Bill Rabon and Norman Sanderson and representatives Pat McElraft and Chuck McGrady were critical in helping to encourage the state legislature to include the funding in the General Assembly’s $23 billion budget. When combined with existing state funding, the budget provides $1.3 million to continue work on the Senator Jean Preston Oyster Sanctuary Network.

“I’m quite pleased that this year’s work was able to be completed in a timely fashion to restore our vital oyster populations,” Sen. Cook said. “And glad to see the state appropriation being matched by federal grant monies to continue the work next year.”

Gov. Roy Cooper’s office also helped secure the federal grant funding. As part of the grant requirement, he wrote a letter to NOAA stressing the importance of oysters to North Carolina’s coastal economy and environment.

With last year’s funding, the federation partnered with the North Carolina Division of Marine Fisheries, Stevens Towing Company, Inc. and several universities to site and construct 15 acres of oyster reef — the Swan Island Oyster Sanctuary — in Pamlico Sound near the mouth of the Neuse River. These acres are part of the Senator Jean Preston Oyster Sanctuary Network.

“The Swan Island Oyster Sanctuary project of 2017 was a tremendous example of smart public-private partnerships. The partnership with the North Carolina Coastal Federation doubled the amount of funding available for this oyster sanctuary,” said Steve Murphey, habitat and enhancement section chief at the division. “The direct contracting of a North Carolina firm, Stevens Towing, to deploy the material purchased and staged by the N.C. Division of Marine Fisheries at its stockpile site in South River (Carteret County), provided a greatly expedited project timeline for deployment.”

These projects also spur economic development and create habitat for oysters and other commercially important fish, including red drum and white, spotted and brown shrimp.

“The public-private partnership accelerated the state’s ability to restore oyster reefs, while leveraging additional grant resources and creating economic development opportunities by hiring North Carolina contractors to do the work,” said Todd Miller, executive director of the federation. “This model will continue with this year’s funding and expand on these great efforts.”

The federation works to create oyster reefs throughout the coast, educates the public about the importance of oysters and also took the lead in developing a five-year blueprint for oyster restoration efforts in the state, titled the Oyster Restoration and Protection Plan for North Carolina: A Blueprint for Action 2015-2020. The State of the Oyster: 2016 Progress Reportoutlines what was accomplished in 2016 and the work that needs to be done to meet the goals listed in the blueprint.

For more information, please contact Erin Fleckenstein at 252-393-8185 or erinf@nccoast.org, or visit ncoysters.org or nccoast.org/oysters. 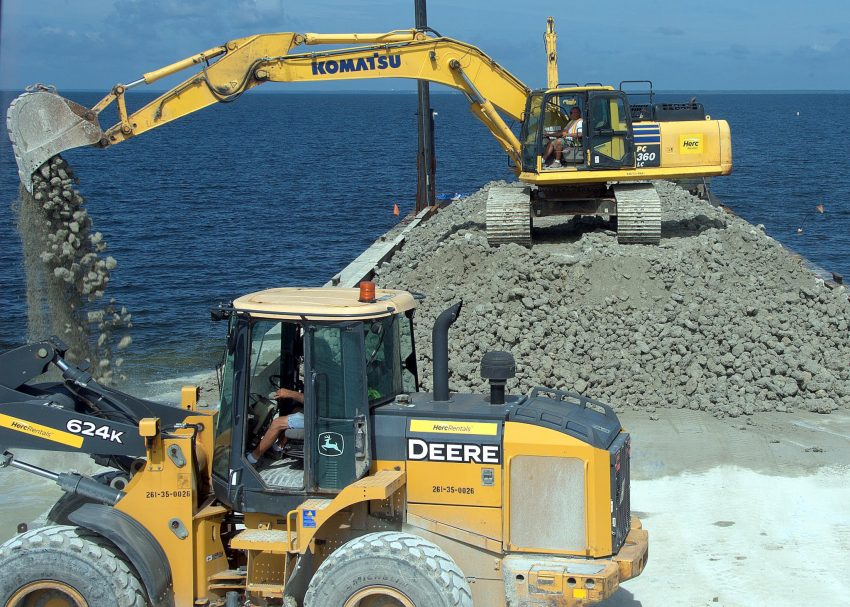 Construction equipment deploys limestone marl into the sound in order to create the reef.