The North Carolina Coastal Federation launched the 50 Million Oyster Initiative in 2017, with a goal of establishing 50 acres of new oyster habitat in the state by 2020.

To reach this goal, the federation and partners are building 40 acres of reef at the Swan Island Oyster Sanctuary. These acres are part of the Senator Jean Preston Oyster Sanctuary Network. Additional acres of oyster reef are being built throughout the state. 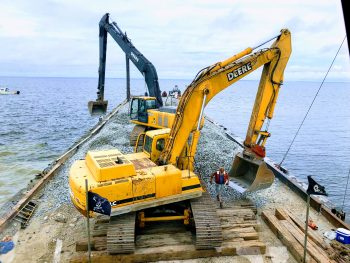 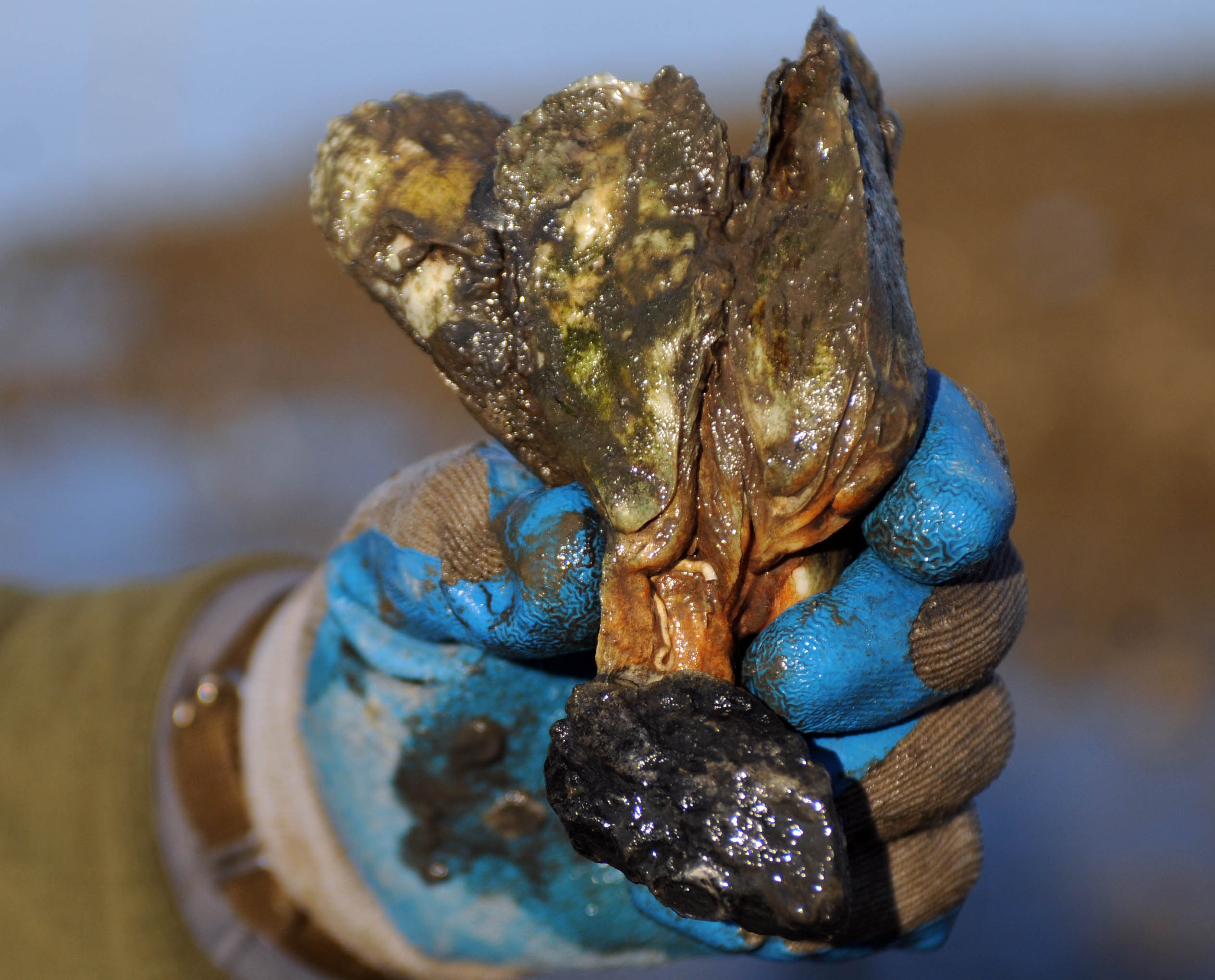 Ted Wilgis, a Coastal Education Coordinator with the federation, holds an example of an oyster found in one of the reefs that was created with marl in 2007 in Dick’s Bay next to Masonboro Island Wednesday, December 14, 2011. Staff Photo By Matt Born WILMINGTON STAR NEWS

Funding for all three phases of the project came from: nearly $3M in state appropriations, $3M in support from the National Oceanic and Atmospheric Administration’s Community-based Restoration Program, Grady-White boats and donations from federation members.

Read a handout about the Swan Island Oyster Sanctuary. 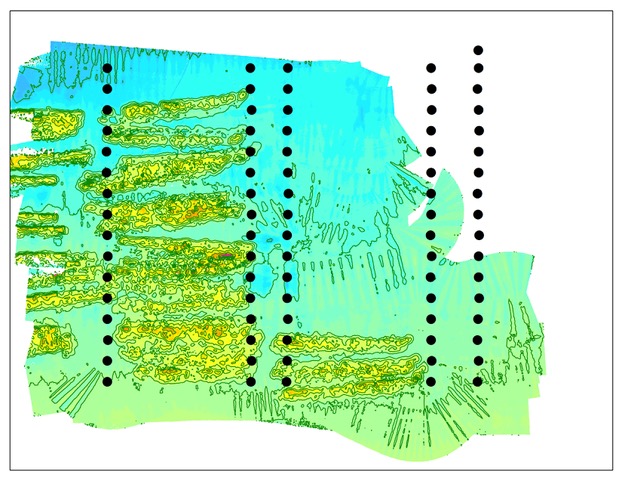 The Division of Marine Fisheries took this image of the ongoing work at the Swan Island Oyster Sanctuary using sidescan mapping equipment in 2018. 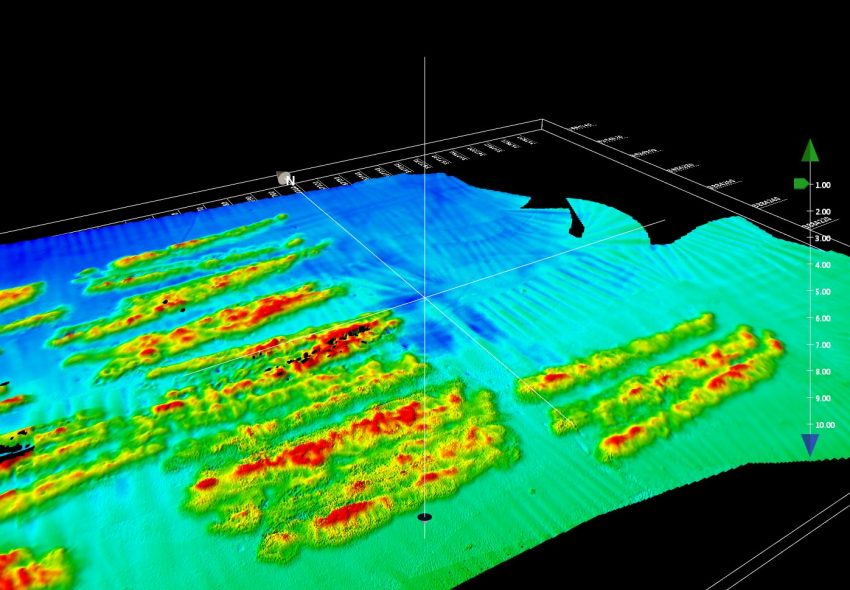 The Division of Marine Fisheries took this image of the ongoing work at the Swan Island Oyster Sanctuary using bathymetric mapping equipment in 2018. 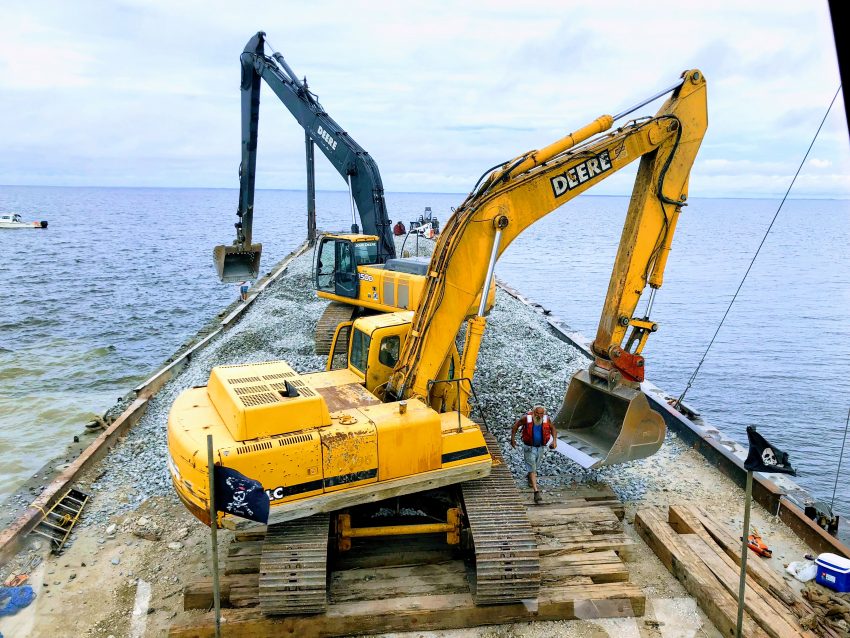 An overhead view of excavators deploying granite at the sanctuary site. 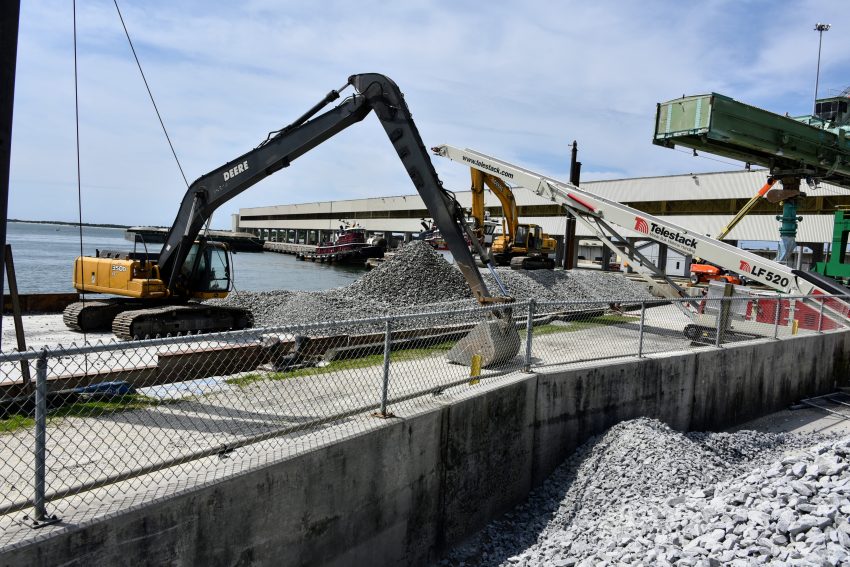 Excavators at the North Carolina Port at Morehead City load granite from the port onto the barge. It takes the barge 6-8 hours to get to the project site. 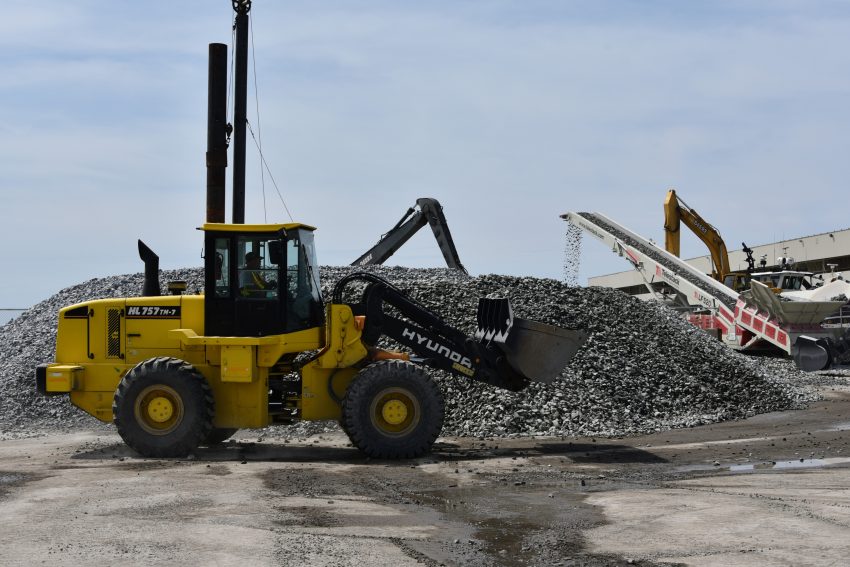 For the first time, granite is being used in a large-scale oyster restoration project. Granite is less susceptible to pests like boring sponge.

Check out 2017 photos from Phase 1 of the project: 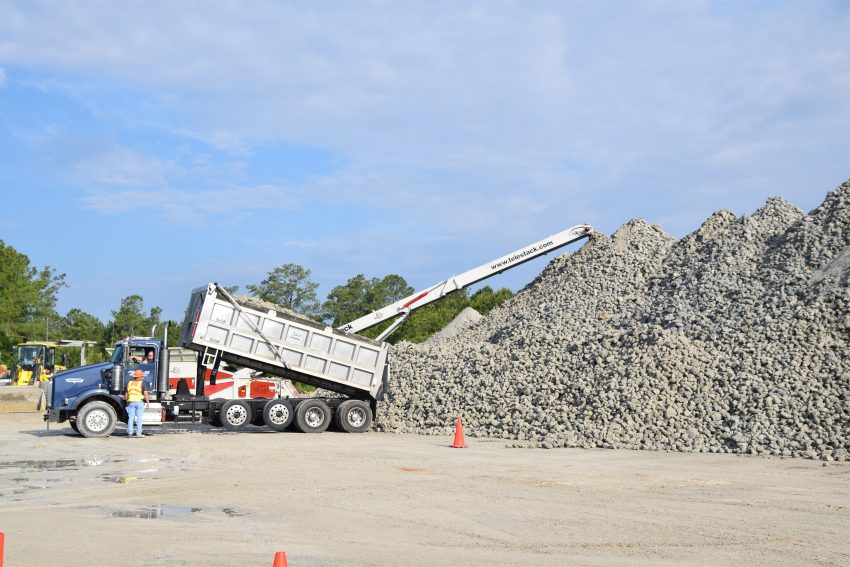 Approximately 18,000 to 19,000 tons of limestone marl are stockpiled at the North Carolina Division of Marine Fisheries’ South River facility. Truckloads of material are still coming in. Photo by Mark Hibbs. 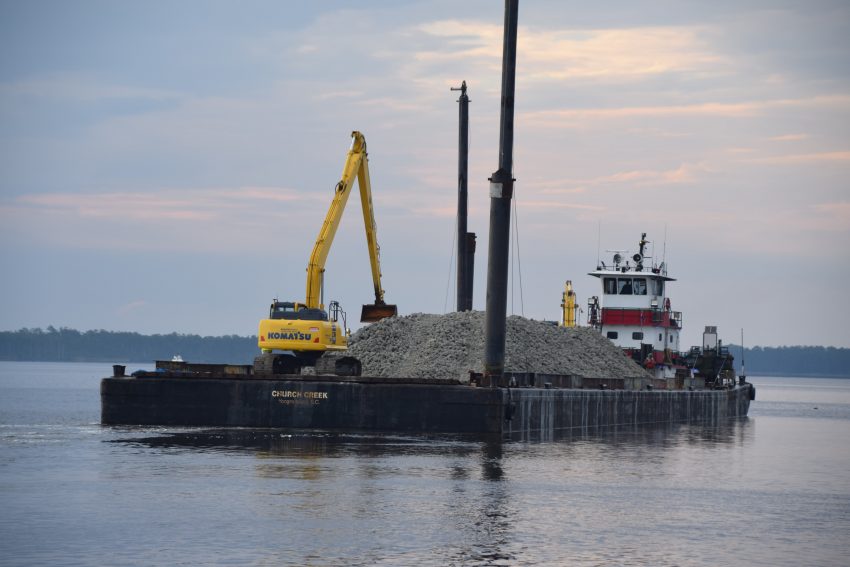 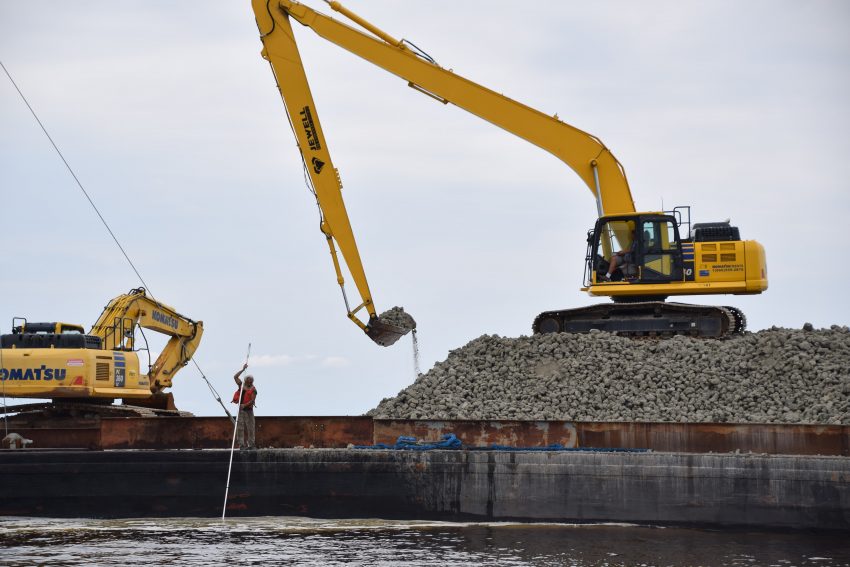 Crew deploy the material from the barge into the sound. Each barge-load holds about 1,000 tons of limestone marl. Photo by Mark Hibbs. 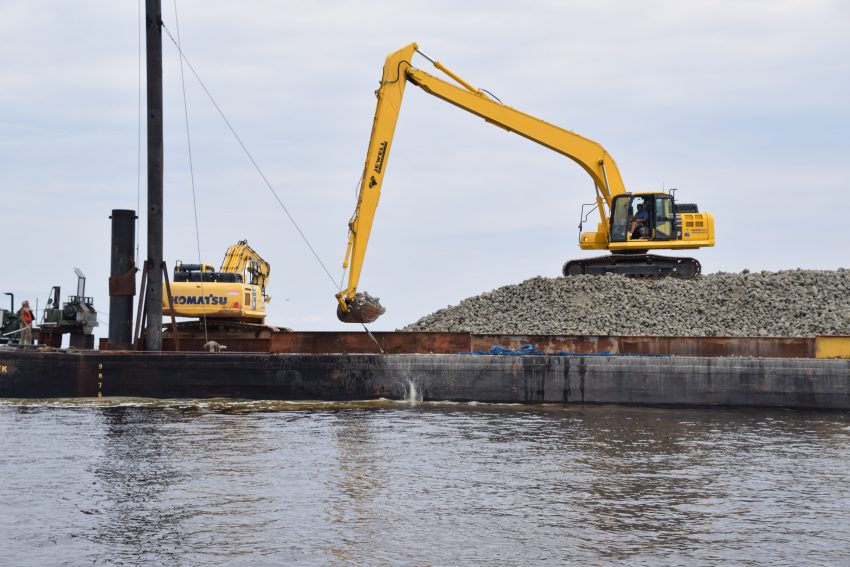 The limestone marl is used to create ridges that are about 4 feet high and 6 to 8 feet wide. The ridges must be at least 6 feet below the surface. Photo by Mark Hibbs. 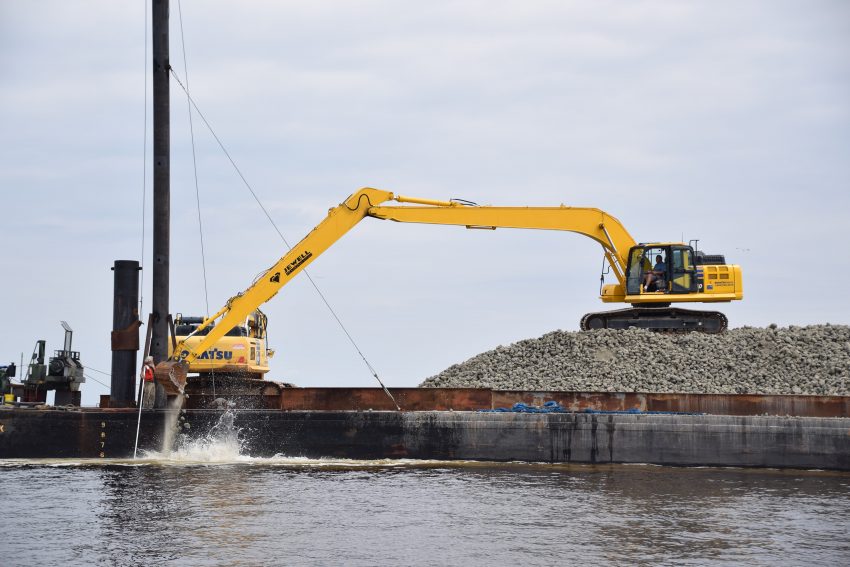 Construction on the sanctuary is expected to wrap up in mid-July. It takes a day to load the barge and a day to deploy the materials. Weather can also impact whether or not the barge goes out. Photo by Mark Hibbs.