Step back in time when you visit the North Carolina Coastal Federation’s Hoop Pole Creek preserve in the middle of Atlantic Beach. Known as the “central park” of this resort town, this preserved 31-acre maritime forest is about one percent of the town and about all that’s left of its natural environment outside the borders of a state park. 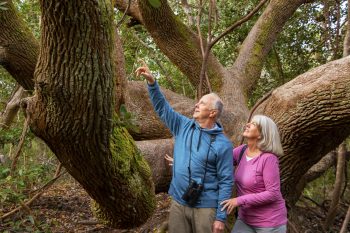 Beautiful, old live oak trees like this one would have been lost if Hoop Pole Creek had been developed.

The federation bought the property in 1997 with a $2.5 million grant from the N.C. Clean Water Management Trust Fund. It was the first land acquired using the newly established fund, and the purchase brought to an end a long and controversial debate over the fate of this property.

For many generations, this beautiful maritime forest has been called Hoop Hole Creek because of the historical marker posted along N.C. 58 or Fort Macon Boulevard. Union forces led by Gen. John G. Parke landed here March 29, 1862, during the Fort Macon campaign.

Many local high school students also knew it as the place to go park on dates. Back in the 1960s, a paved road was built in a failed attempt to develop the land, and it became a convenient lovers’ lane.

Investors from near Charlotte had a different idea when they bought the property in 1984 and made plans to build 100-condos and a 100-boat marina. Their plans would have destroyed the thick canopy of live oak trees and polluted the creek that’s rich in clean oysters and fish.

The federation successfully contested the state permit. This battle involved an amazing cast of characters, including two young lawyers who represented the federation pro bono. They then worked for Terry Sanford, a former governor who later to become a U.S. senator. These lawyers were Charles Meeker, who went on to become a long-time mayor of Raleigh, and Steve Levitas, who became deputy secretary of the N.C. Department of Environment and Natural Resources under Gov. Jim Hunt.

Also involved was Paul Wilms. He was director of the N.C. Division Water Quality before he later took the job as the head of the N.C. Homebuilders Association. Wilms wrote a key memo that resulted in the permit being revoked for the project. He said it would degrade water quality because of polluted stormwater and illicit waste discharges from boats.

The battle over this project paved the way to the adoption of much tighter state rules to control polluted stormwater runoff and for the proper siting of new marinas so as to protect shellfish waters that are still in effect today.

Ten years went by, and then in1996, the same investors applied for a new state permit to build 50-condos and a 50-boat marina. This was the same year that lawmakers created the trust fund. The federation offered to buy the property if it could acquire the grant funds. The developers agreed to the potential purchase, and a year later the property was saved as a water quality buffer.

One of the most surreal days of my life was when I visited the land the first time after we bought it. In a heavy downpour, I had a ball pulling up survey stakes that laid out the planned development. It was great fun to do that legally.

Since then, the property has been zoned “conservation” by Atlantic Beach. The federation built a nature trail that includes a boardwalk that doubles as a dam to hold back polluted runoff so that it will filter into the ground and not pour directly into the adjacent creek. Thousands of school children visit the property each year to learn about the water quality and the adjacent estuary.

One of the most vexing management problems we faced was what to call the property. Local historian Jim Willis altered the historical marker next to the property with black electrical tape from Hole to Pole. He says its real name refers to a piece of fishing equipment called a “hoop pole” that is used to bail fish out of a purse seine. None of the historical maps ever showed a creek named Hoop Hole, and that name came most likely from a printing error when the historical marker was made.

The nature trail is open for public use during daylight hours. It’s a wonderful place to escape the urban sprawl, and to see the island as it existed long ago. There is a guided nature trail brochure at the trailhead. Be prepared for some bugs in the summer.