Environmental groups opposing offshore oil and gas prevail for now. The legal challenge against the National Marine Fisheries Service (NMFS) will continue in U.S. District Court in South Carolina after Judge Gergel denied the Department of Interior’s motion to dismiss it. This ruling follows a decision Judge Gergel made at the beginning of the year, directing federal agencies to produce “all memos, emails and attachments containing factual information relied on or considered, directly or indirectly… between agencies or with non-agency third-parties that were considered,” for the purpose of deciding to issue incidental harassment authorizations. 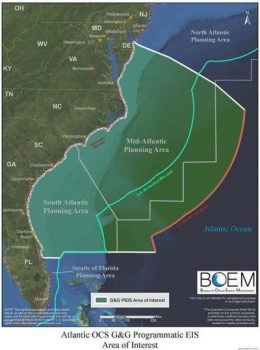 Disclosure of this information is expected to provide insight into how the agencies decided to open certain areas of the coast, which could be an advantage in the fight against seismic blasting. In the meantime, the federation and Don’t Drill NC coalition partners are continuing to monitor Bureau of Ocean and Energy Management (BOEM) activity in case the agency permits requests from six companies to conduct seismic testing in the Atlantic. The parties involved in the lawsuit plan to file a motion for injunction immediately after any permits are issued.