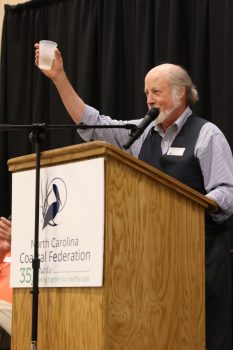 Bland Simpson, writer, musician and distinguished UNC-Chapel Hill professor, closes the awards ceremony with a Toast to the Coast.

Bland Simpson, distinguished professor at UNC-Chapel Hill and award-winning musician and writer, delivered a toast to the coast at the North Carolina Coastal Federation’s 2017 Pelican Awards and 35th Anniversary Soundside Soiree on Aug. 5 in Morehead City. Simpson is a member of the federation’s board of directors.

We began 35 years ago, with one man and one idea, fighting an outrageous scheme to strip mine the peat surface of Hyde County, North Carolina, which failed because of the leadership of the fledgling North Carolina Coastal Federation.

That man, Todd Miller, is still here, joined over the years by highly devoted staff and members of the board of directors, generous donors and many, many member-volunteers contributing thousands of hours of work.

That idea is still here, too — “working together for a healthy coast” — and implicit within it are two others:

*  We have helped stop a cement plant in New Hanover County, which would have harmed our skies, the people beneath them and the Northeast Cape Fear River itself.

*  We have helped get strong stormwater regulations in place, built rain-gardens and living shorelines up and down the coast, and have found support for low-impact development.

*  We have helped in the effort to save Rich Inlet.

*  We have shown what a great buffer can do for the health of a river, with our work at the North River Wetlands Preserve.

*  We have worked to restore the historic hydrology of Hyde County and thereby help clean up western Pamlico Sound’s shellfish waters.

*  We have led the way towards the restoration of North Carolina’s oysters, from shell bags in the White Oak to those at Springers Point on Ocracoke, to great new reefs in the Pamlico Sound.

*  And we have helped lead the mission to keep offshore drilling and seismic testing from happening here, and we proudly join the governor’s chorus: “Not off our coast!”

*  This is only some of we have done and what we are doing.  Because we know we have been blessed with an enormous, complex riverine and coastal estuary, the likes of which exists nowhere else on earth, we believe:

Let us be the Clean Water State, for ourselves, for our children and our children’s children, and as an exemplar for our sister states, and for lands and peoples well beyond our borders.

Fellow citizens, working together for a healthy coast, let us make our many waters living models to the world!

At 35 and counting, here’s to the North Carolina Coastal Federation!