‘Not off our coast’ — Gov. Cooper comes out strong against offshore oil and seismic blasting 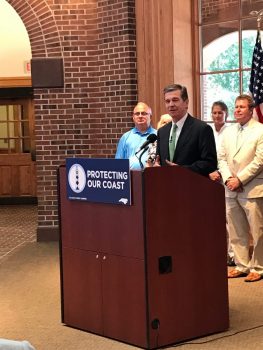 During his statement, the governor spoke about North Carolina’s strong coastal economy and beautiful beaches. He noted the risks oil spills pose to the coast, and he said that the North Carolina Department of Environmental Quality will be submitting its comments against seismic blasting on Friday, which is the National Marine Fisheries Service’s deadline.

Cooper also pointed out that there are ample renewable energy sources available that are safer and cleaner than drilling for offshore oil.

We thank Gov. Cooper for standing with the people of North Carolina. We are grateful for leaders who recognize how special our coast is and are willing take a strong stand to protect it.

Thank you to all who wrote letters, sent emails or called the governor’s office. Your voice made a difference, and the governor’s opposition is an important step in protecting our coast’s economy, resources and natural beauty.

The governor’s support will be critical moving forward, but the fight is not yet over. There are still actions you can take to prevent offshore oil drilling and seismic blasting from occurring off our coast.

Stay updated on these issues at nccoast.org/oil and nccoast.org/seismic. More resources and information are available at dontdrillnc.org.