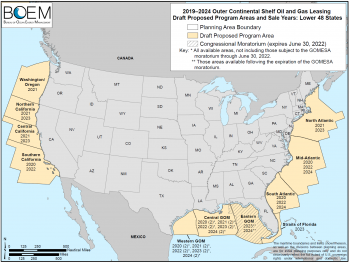 The map above shows the areas the draft plan could open to offshore drilling. Source: BOEM

BOEM’s new draft oil and gas leasing program could open nearly all U.S. coastal waters to offshore drilling. Thank you everyone who submitted comments on the draft plan. Stay tuned for updates.

Public opposition to offshore oil drilling helped stop it from happening off North Carolina’s coast in 2016. It also helped convince Gov. Roy Cooper to take a strong stance against offshore oil drilling and seismic blasting. The waters off North Carolina should be off-limits to these destructive processes. They are too great a risk to this state’s coastal economy and environment.

Questions? Contact coastal advocates Kerri Allen at kerria@nccoast.org or Michael Flynn at michaelf@nccoast.org. You can also reach them at 252-393-8185.
More information is also available at dontdrillnc.org.

Check out this interactive map and animation created by the Southern Environmental Law Center.

100% of oceanfront municipalities in North Carolina have now passed resolutions opposing offshore oil drilling and seismic testing. The Town of Indian Beach in Carteret County adopted such a resolution during the March meeting of the Board of Commissioners, joining a total of 44 other towns, cities, and counties throughout the state. Even inland communities, some located as far west as Asheville, have joined in this fight that affects all North Carolinians.

The U.S. House of Representatives voted in favor of two bills that would prevent new offshore drilling from occurring off the Atlantic, Pacific and Florida Gulf Coast.

In response to the vote, Rep. Price issued a statement saying, “I am extremely pleased that this legislation passed the House of Representatives and I urge my colleagues in the Senate to take it up without delay.” Both of these bills will be placed on the Senate calendar for consideration along with the Clean Ocean and Safe Tourism (COAST) Anti-Drilling Act (S. 1304), which was introduced by Sen. Menendez (D-NJ).

Program release postponed, but the fight against offshore oil continues

The release of the 2019-2024 Proposed National Outer Continental Shelf Oil and Gas Leasing Program has been postponed indefinitely according to newly confirmed Interior Secretary David Bernhardt. Bernhardt explained in an interview with the Wall Street Journal, published on Apr. 25, 2019, that the agency will await the outcome of the appeals process against the decision from a federal judge. This decision will determine whether or not the ban on offshore drilling for oil and gas off the coast of Alaska and within specific canyons in the North and Mid-Atlantic will be upheld.

While this ruling is critical for the protection of irreplaceable habitat in Arctic and Atlantic waters, it does not diminish the threat of drilling along the North Carolina coast. The Bureau of Ocean Energy Management scheduled open houses in Kill Devil Hills and Morehead City in conjunction with the release of the proposed program, providing an indication that North Carolina was going to be included. Early speculation indicates that the appeals process could continue throughout the year and would coincide with the 2020 presidential election.

Leading environmental groups sued the federal government today to prevent seismic airgun blasting in the Atlantic Ocean. This extremely loud and dangerous process, which is used to search for oil and gas deposits deep below the ocean’s surface, is the first step toward offshore drilling. If allowed, seismic airgun blasting would harm marine life, including whales, dolphins, fish and zooplankton – the foundation of the ocean food web.

The government has estimated that seismic airgun blasting in the Atlantic could harass or harm marine mammals like dolphins and whales – which depend on sound to feed, mate and communicate – hundreds of thousands of times. Seismic airgun blasting would also jeopardize the iconic North Atlantic right whale, a critically endangered species, according to 28 leading right whale experts.

The National Marine Fisheries Service (NMFS) granted incidental harassment authorizations (IHAs) to five companies that submitted applications to conduct geophysical surveys along the Atlantic Outer Continental Shelf. The NMFS is required to review the applications in accordance with the Marine Mammal Protection Act (MMPA) and provide companies with a suite of monitoring and mitigation requirements. An IHA essentially grants these companies the ability to unintentionally “harass, hunt, capture, or kill” a small number of marine mammals.

The North Carolina Coastal Federation is concerned that the continuous and cumulative air gun blasting associated with seismic testing surveys will negatively impact marine mammals. Recent studies indicate that marine mammals are likely to suffer from communication disruptions and behavioral disturbance resulting in stranding and even death. Studies have also shown that seismic activity can dramatically decrease the abundance of zooplankton, which is a key organism in the marine food web and a main source of food for fish and baleen whales.

The federation has been consistently concerned with seismic activity along the Atlantic Outer Continental Shelf. Since late 2015, the federation has been submitting its own and signing on to comment letters opposing seismic activity and stating its concern for marine life. Additionally, Gov. Cooper recently declared his opposition to the decision made by NMFS to grant IHAs, reiterating his opposition to offshore drilling.

The Bureau of Ocean Energy Management (BOEM) released the draft 2019-2024 National Outer Continental Shelf Oil and Gas Leasing Program. This draft program opens almost all U.S. coastal waters to drilling, including the waters off the coast of North Carolina. Gov. Roy Cooper released a statement the same day reiterating his opposition to offshore drilling. The comments sent to BOEM will help with the development of the draft Programmatic Environmental Impact Statement (PEIS) and the proposed program. Once these documents are released, there will be a 90-day comment period.

‘Not off our coast’ — Gov. Roy Cooper announces his opposition to offshore oil drilling and seismic blasting

Gov. Cooper announced his opposition to offshore oil drilling and seismic blasting at Fort Macon State Park in Atlantic Beach. Cooper cited the need to protect the coastal tourism and fishing industries from any potential harm an oil spill or seismic testing would cause. He also said that the North Carolina Department of Environmental Quality would submit arguments against seismic blasting to the National Marine Fisheries Service. Read a full update here.

As a result of the executive order to reverse the freeze on offshore oil development in Atlantic, the National Marine Fisheries Service (NMFS) has published a public notice (PN) for comment on potential seismic surveys (blasting) along the Atlantic Coast. The PN describes the process, the potential impacts to marine mammals and provides information on each of the five companies who have applied for permits and potential mitigation of the expected impacts. The North Carolina Coastal Federation is working with a coalition of environmental groups to inform the public of this ill advised action. Read the PN. The comment period ends July 21.

President Trump signed an executive order on April 28 directing the U.S. Department of Interior to review locations for offshore oil and gas exploration, including those taken off the table in March 2016.

The North Carolina Coastal Federation is urging North Carolina residents to email Gov. Roy Cooper and ask that he let the federal government know the waters off of North Carolina’s coast should be off limits to offshore oil and gas drilling.

Learn how you can contact Gov. Cooper.
Read Coastal Review Online’s article on the executive order.

History of the issue:
The North Carolina coast has been off-limits to offshore oil drilling for nearly 30 years — and it should stay off-limits.

The Bureau of Ocean Energy Management (BOEM) released in January 2015 its Draft Proposed Program for 2017-2022, which included new program areas in Atlantic waters. 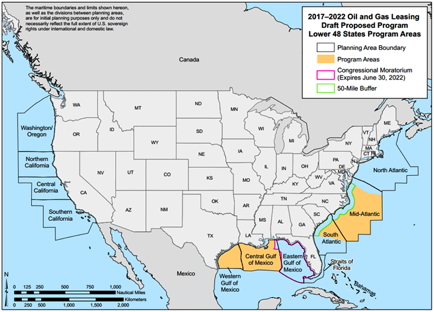 On March 15, 2016, BOEM released a Final Environmental Impact Statement (EIS) that examined the direct, indirect and cumulative impacts of oil and gas activities off the North Carolina coast. BOEM decided to remove North Carolina from its proposal. Offshore areas are parceled into blocks that are categorized and sold to oil and gas companies, and previously, a lease sale was scheduled in the Mid-Atlantic region for 2021.

Your comments influenced what was evaluated in the EIS, and whether or not sections of our offshore waters were ultimately included in BOEM’s 2017-2022 leasing program. Read the latest Washington Post report.

Even after BOEM’s March 2016 announcement, seismic surveys continued to be considered. The federation sent a letter in June 2016 to BOEM and a second to the National Marine Fisheries Service (NMFS) requesting that BOEM reexamine its previous conclusion on the effects seismic surveys have on fish and that the two agencies enter into formal consultation to discuss the effects of geological and geophysical activity on essential fish habitat. Read more about the letters. Read the letter sent to the Mid-Atlantic Fisheries Management Council asking that the council also send letters to BOEM and NMFS.

Keep up with the latest on
offshore drilling in North Carolina:

Read More
Go to Top
You can help!