Twenty people joined the North Carolina Coastal Federation and East Carolina University (ECU) for a tour on June 2 that showcased projects that will reduce the amount of stormwater runoff flowing into the White Oak River by 61,000 gallons from the 1-year 24-hour storm, protecting it for fishing, swimming, kayaking and more. 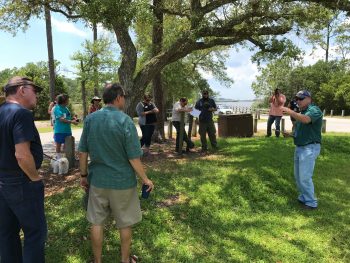 Charles Humphrey stands in the rain garden and talks about the berm that they built in order to prevent water from flowing down the boat ramp, pictured in the background.

The first stop on the tour was a best management practice (BMP) that all of the visitors stepped over without realizing it — an earthen berm that doubles as a walkway. The earthen berm is built in a swale and blocks water flow in the swale.

Grassy swales are effective because they slowly move water and allow some of it to infiltrate into the sandy soils in the process. Earthen berms slow that water movement down even more.

“While a swale by itself is much better than a concrete pipe or a concrete ditch, the federation saw the opportunity to build a very simple retrofit that would infiltrate the water even better,” said Bree Tillett, coastal specialist with the federation. “Earthen berms help slow down the water while it’s moving down the swale so that it has time to infiltrate during a storm.”

Humphrey said that coastal areas are lucky in that sandy soils infiltrate very effectively, but one problem with coastal areas is that they aren’t that high above sea level. In result, Humphrey and his team couldn’t dig too deep for the rain garden.

“So rather than digging out, excavating this out too much, we took some soil and piled it on the back end and made a berm,” Humphrey said.

In addition, project partners installed sloped sidewalks that force runoff into forested areas and check dams that slow down water flow in swales. Humphrey and his team also installed projects in the Ocean Spray neighborhood right down the road from the Croatan National Forest. Runoff was emptying into ditches, causing erosion and flooding. To solve this issue, they reshaped the road’s edge and also put sod on the eroded areas. 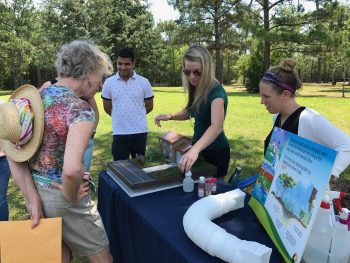 Interns from the North Carolina Coastal Federation demonstrated how simple BMPs, such as redirecting downspouts, can prevent runoff from flowing over hard surfaces such as roofs and driveways.

Humphrey also installed “flash boards” into some of the culverts, or the pipes that are installed underneath driveways that cross over ditches.

“It’s a little frame that flows in the pipe, and it has a slot where you can put in boards,” Humphrey said.

The board prevents water from quickly moving down ditches, allowing it to sit and infiltrate. The board can be removed once the water fills to the top. However, the board still does its job, as it will successfully slow down the flow of the first half inch of rain, which is the most polluted runoff.

Over the past several months, federation staff also installed 42 rain barrels in the Marsh Harbour neighborhood. Jenn Conceicao, who is a resident of the neighborhood, praised the four rain barrels that were installed at her house in 2016.

“It’s great that I’m able to use what the environment provides us, save the wetlands and water my flowers without having to use as much water,” she said.

The federation teamed up with the Croatan National Forest and the Town of Cedar Point to install these projects as part of a continued effort to implement the White Oak Watershed Restoration plan and reduce polluted runoff from flowing into the river.

“Due to this project, storm water will no longer directly flow into coastal waters, they will be collected and absorbed on site,” said Cody Hutchinson, district ranger of the Croatan National Forest. “To spread the great news on the project and its benefits, the Forest Service and the federation has teamed up to provide interpretation at the site. We both look forward to working together on this and other projects in the future.”

Funding for the most recent stormwater reduction projects was made possible by the Environmental Protection Agency Section 319 Program. For more information, please contact Lauren Kolodij at 252-393-8185.