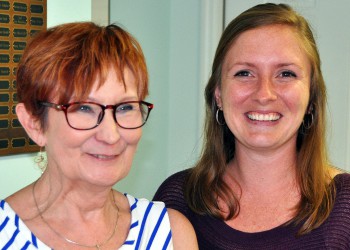 Jo Ann Marsh, left, is retiring from the federation after 23 years. Brittany Ellenberger will take over as business manager July 1.

When Jo Ann Marsh first visited the North Carolina Coastal Federation’s office in 1993 for an interview, she wondered what she had gotten herself into.

At the time, the federation was based out of an office off N.C. 58 on the White Oak River. It was back in the woods, past a dog kennel, and the road was riddled with potholes.

“I thought I was getting into something a little crazy,” she said. “But it proved to be wonderful.”

Marsh is retiring from her position as business manager for the federation at the end of June after 23 years of handling the day-to-day business operations for the organization, including the finances and personnel management.

“I’ve loved being part of the bigger picture of the environmental programs,” she said. “And the people — the people are fantastic.”

Todd Miller, executive director of the federation, said without Marsh, the federation wouldn’t have been able to accomplish all the work it has done to protect and restore the coast in the last two decades.

“Jo Ann’s work grew tremendously with the organization. She does the work of three people,” Miller said. “She is loyal and dedicated.”

Starting July 1, Brittany Ellenberger will be the new business manager for the federation. Ellenberger previously worked as a senior associate at the accounting firm Williams Scarborough Smith Gray, LLP in Jacksonville. She is from Swansboro and is a graduate of the University of North Carolina at Wilmington.

“Working for an organization that helps restore wetlands and maintain our beaches was very appealing,” Ellenberger said. “I’m looking forward to helping the federation continue to be successful.”

The federation has since moved from its office on the White Oak River — but not before Marsh lost two mufflers to the potholes. 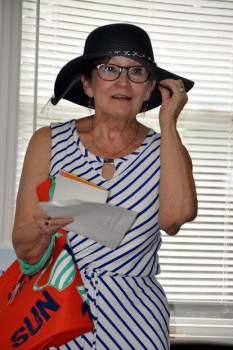 Jo Ann shows off her new hat and bag at her retirement party.

“The office back in the woods, that memory will never leave,” she said. “But the potholes were enormous. If you didn’t know where they were, you lost something.”

The joke at the federation is that Marsh was hired because of her last name. She said, laughing, that it might have been one of the reasons. Marsh saw the job listed in a local newspaper after she had finished a degree at Carteret Community College.

“The ad listed all the things you had to be qualified for, and I qualified for all of them,” she said. “I was excited to see I’d get to use the program PageMaker, and I eventually made a cookbook for the federation.”

Marsh said she will miss the people most when she retires, adding that she is thankful to have worked under a board that was so dedicated to the federation’s work and employees.

“They work hard for us for nothing,” she said. “They’ve been very good to the employees and to me.”

In retirement, Marsh said she is most looking forward to spending time with her mother and working in her glass shop. She makes stained glass panes that tell stories, and she wants to start creating more modern designs.

She plans to travel in the fall and especially wants to see the Grand Canyon and other national parks out West.

The federation, along with family and friends, celebrated Marsh at a luncheon on June 29 at the central office in Ocean.

“I can think of no one else that has earned the right to retire more than Jo Ann,” Miller said. “We are going to miss her a lot.”