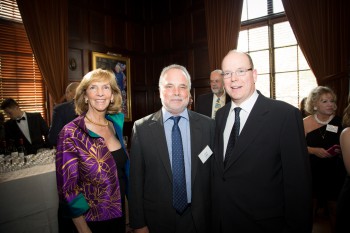 Todd Miller, founder and executive director of the North Carolina Coastal Federation, was named Thursday a “Hero of the Seas” as part of the prestigious Peter Benchley Ocean Awards.

The awards celebrate outstanding leaders who help preserve our oceans and support the coastal communities that rely on a beautiful and productive coast.

Wendy Benchley co-founded the awards eight years ago to honor the legacy of her late husband, Peter, author of “Jaws” and a lifetime marine conservationist. The awards are often referred to as the “Academy Awards” for the ocean and recognize excellence and achievement across a range of categories, including policy, science, media and grassroots activism.

A lifelong resident and advocate for the N.C. coast, Miller was honored for the work he and the federation have done since its founding in 1982 to enhance the environment and economy of the state’s coastline. Under his guidance the federation carries out advocacy, education and restoration programs that have reduced pollution and protected hundreds of thousands of acres of N.C. coastal habitat.

In his acceptance remarks, Miller stated, “Clearly, the job of protecting our coast is not done.” Expressing concern for the increase industrial development and the renewed efforts to drill for oil and natural gas off the state’s beaches, Miller shared how these choices will continue to shape the future of our coastlines.

“They challenge us to do even more to protect and restore our world’s amazing coasts—and that’s vital since that job grows ever more complex and difficult for each new generation.”