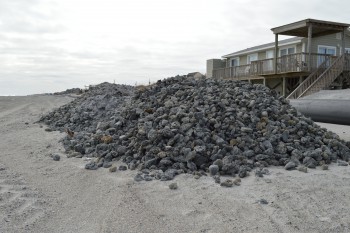 NORTH TOPSAIL BEACH UPDATE, MAY 8, 2015
On April 29th the Corps of Engineers approved the extension request by the town contingent upon compliance with the terms of the biological opinion issued by the U.S. Fish & Wildlife Service.

The town also received approval from the Division of Coastal Management for the permit extension. The town is now waiting on a final determination from the National Marine Fisheries Service who has given the town until May 10 in order for the required consultation to be completed. This consultation is for activity below the mean high water mark which includes any activity in the surf zone to 1.5 miles offshore which includes dredging that is currently taking place. If the NMFS does not approve the extension all activity and demobilization of the beach construction must end by 11:59 p.m. on that date. Whether a permit extension is granted or not, the town will be dealing with the rock removal and mitigation for some time which could also increase the project budget. The town has scheduled a special meeting on May 20th to discuss their options for completing the project this summer or next fall.

In March, rocks began being placed on the beach at North Topsail as part of the town’s beach nourishment plan. The rocks pose significant problems for endangered sea turtle and shore bird nesting sites and violates the State’s sediment criteria rules for placement of fill on public beaches. The state Division of Coastal Management, the Corps of Engineers, the US Fish and Wildlife Service and other state agencies have been working with the town and the contractor to mitigate the potential effects of this beach disaster.

The state and federal permits for the project end on April 30th, and the town has requested an extension to June 30th to complete the project which was delayed by bad weather and equipment problems. The project is now approximately half finished and will cost over $16.8 million to complete.

The State Division of Coastal Management could have stopped the project as soon as the unsuitable material was pumped on the beach, but opted to work with the town to mediate the problem. As a result, additional delays and placement of unsuitable material continued for over a month. Now, the U.S. Fish and Wildlife Service must conduct a biological opinion, required by the Endangered Species Act, to assess the potential effects of granting a project extension on sea turtles. That decision is expected by April 20th. Whether a permit extension is granted or not, the town will be dealing with the rock removal and mitigation for some time which could also increase the project budget. The town has scheduled a special meeting on Tuesday April 21 at 10 a.m. to discuss their options for completing the project.