WRIGHTSVILLE BEACH — Dozens of contractors have been at work over the past year transforming the Palmgren-O’Quinn house into the N.C. Coastal Federation’s Coastal Education Center and Southeast Office. Many of them were so impressed with the project that they donated funds and services. These donations were the final push that sent the federation’s capital campaign to move and restore house over the $600,000 goal with $643,715 raised.

“The support and excitement for the new center has been incredible,” said Tracy Skrabal, coastal scientist and manager for the federation’s southeastern office. “Once people hear about our project, they want to be a part of it. Our contractors, vendors, volunteers and campaign donors have been so generous.  It’s been a fascinating effort with terrific partners – from barging the house down the Intracoastal Waterway to incorporating low-impact development features into the landscaping.” 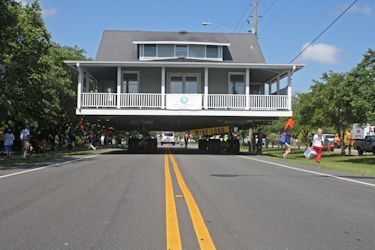 While many businesses donated services and equipment, there were several stand- outs. Ralph Konrady with Konrady & Son Construction served as general contractor on the project. He not only made a major contribution to the campaign, but asked for donations from other contractors and instead of gifts at his last birthday party.

Phil Szostak of Szostak Design donated architectural design services for the center. His artistic rendering of the center was used throughout the campaign. Jason Wade with A Structural Guy Engineering donated a portion of his time and expertise to help move and relocate the house, as did the engineering architects from S&S Design.

Coastal Stormwater Services Inc. donated the design, labor and materials for a comprehensive stormwater plan for the new center, and the fire and safety alarm system was donated and installed by Kellers Inc.

The $643,715 raised provided money to move the house by barge and truck to the Wrightsville Beach Town Hall, renovate and furnish the house, landscape the center grounds and develop new programming.

“It was an ambitious goal,” explains Holding.  “In addition to raising the needed funds and saving an important piece of Wrightsville Beach history, the campaign put the spotlight on the federation and all that it does in the southeastern coastal region.  From helping to preserve Bird Island to reducing pollution in the Lockwoods Folly watershed, the federation has been working in the area for about 30 years.  Our new center will allow us to expand our programs and reach even more people at a time when it’s especially important. ”

The grand opening of the Coastal Education Center is scheduled for Saturday from 2 p.m. to 5 p.m., and everyone is invited. Go here for more information or call 252-393-8185.