Spring break groups make a difference on the coast

Nine students from Ithaca College traveled to the federation’s Wanchese office for the week of March 12.

“The maintenance has become a bit too much for the middle schools students to handle on their own, and I’m grateful to have adults come through about once a year to do some heavy lifting, trimming, raking and sawing,” Hallas said.

The students also did a highway cleanup on the federation’s adopted portion of N.C. 245 and kept in good spirits despite the windy conditions.

Thursday was spent exploring the living shoreline at Jockey’s Ridge State Park. They assisted with repairs needed after the month’s storms, replacing trail markers and cleaning up debris that washed in. They also had the chance to do a little seining and learn about the inhabitants of the estuary they had been learning about all week.

Hallas said she was very impressed with their work throughout the entire week.

“They were all hard workers, despite being challenged with a strong, cold winds all week,” Hallas said. “They helped support each of the federation’s goals and had a very well-rounded week.

One afternoon of the week was also spent working with students from Appalachian that were being hosted by the Nature Conservancy. They helped with the rain garden maintenance at Manteo Middle and also spoke with students there.

“They were so appreciative to work with several community groups during their week here — us, the Nature Conservancy and National Park Service — and it really made for a more enjoyable experience for them, with a greater understanding of the coast,” Hallas said.

Check out these photos from their week of service. 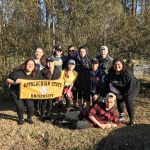 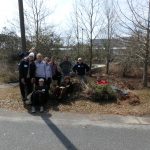 The students stand by the trash they picked up during a highway cleanup. 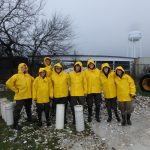 Despite bad weather, the students still bagged oysters that will be placed onto a living shoreline. 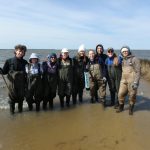 The students explored the federation’s living shoreline at Jockey’s Ridge.

Both groups performed trail maintenance at Patsy Pond Nature Trail, which is managed by the federation in cooperation with the Croatan National Forest. They also visited the North River Wetlands Preserve where they planted trees and worked on the section of the Mountains-to-Sea trail that runs through the preserve.

“We are currently working to connect this section of the MST trail to a more accessible point, and their work helped us move forward with this project,” said Rachel Bisesi, coastal education coordinator.

At Fort Macon, the students cleaned up the shoreline during both weeks. These cleanups were supported by the National Oceanic and Atmospheric Administration (NOAA) Marine Debris Program.

“We have a very busy but productive two weeks with the spring break groups,” Bisesi said. “Because of all of the extra help, we were able to do a lot of work in a short amount of time. Working with groups such as these always remind us how invaluable our volunteers are.”

“Partnering with the North Carolina Coastal Federation for my last two spring breaks has been nothing less than amazing,” Shepard said. “Whether it was picking up litter at the marsh, to teaching some children how to shuck oysters, to creating a Living Shoreline or even the Mountains-to-Sea trail, I can honestly say that I’ve realized I’ve taken so many things for granted. Working as the student lead this year, I really realized that change lies within yourself.”

Check out these photos of their volunteer work. 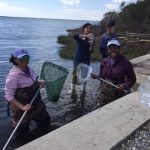 The ECU students explored a living shoreline during their spring break. 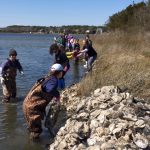 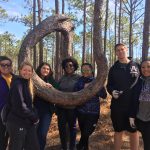 At Patsy Pond, the ECU students pose by a unique tree along the trail. 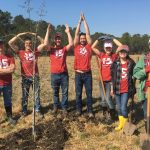 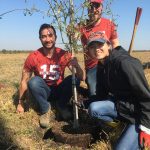 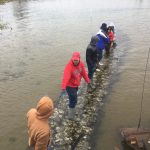 The OSU students passed oyster bags down the line to be placed onto a private living shoreline.