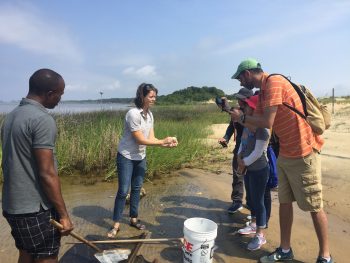 A group of international visitors recently stopped by Jockey’s Ridge State Park, where staff from the North Carolina Coastal Federation talked with them about living shorelines and other elements of the organization’s work.

On June 16, the group — which came to the United States through the International Visitor Leadership Program through the U.S. Department of State — met up with two federation staff members at the state park. The group of five included a liaison and four visitors from Egypt, Sierra Leone, Thailand and Vietnam. Their project title was Our Planet: Preservation and Sustainable Use of Our Oceans, and all of the visitors have worked in and with the environmental field in their home countries.

“It was great to be a stop on this group’s visit in the United States. They really seemed to be enjoying their trip and were very interested in the work we are doing along our coast,” said Madison Douthitt, AmeriCorps member at the federation’s Wanchese office. “When it comes to issues along the coast I think we have similar problems worldwide, so it is great to be able to share ideas and our projects’ results so that they can have a better idea of what might work or not work for them.”

Douthitt, along with Erin Fleckenstein, coastal scientist and Wanchese office manager, talked with the group about the effectiveness of the living shoreline the federation helped install at Jockey’s Ridge.

After the presentations, the group explored the living shoreline where they learned more about the role of oysters and found fish, crabs and a water snake. The visitors shared stories about their work and projects in their countries and later explored the dunes with Jockey’s Ridge State Park staff.

Approximately 5,000 people visit the U.S. each year through the International Visitor Leadership Program. Most participants are 25-to-45-years-old and are interested in meeting U.S. professionals in similar fields to exchange ideas. During the three-week visit, participants visit four to six cities.