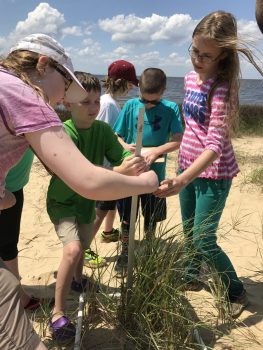 Students help plant plugs of marsh grass for the living shoreline at the park.

The entire sixth-grade class from First Flight Middle School went on a field trip to Jockey’s Ridge State Park on April 27, where they learned about living shorelines, salt marsh and the components of habitats at the park.

The students spent the first half of the day exploring the federation’s living shoreline at the park, which is on the Roanoke Sound. The students learned some components of vegetation monitoring and made observations about the zones of the marsh.

“They also spent time exploring with dip nets and a seine net to see firsthand aquatic organisms depending on this area as habitat. While exploring the marsh, they found shrimp, small fishes, blue crabs and even a snake. They were also able to observe several birds passing through, including osprey and a cormorant,” said Sara Hallas, coastal education coordinator for the federation’s Wanchese office. “Being able to get into the water was a highlight for many of the students.”

The sixth-graders helped the federation plant 1,000 plugs of marsh grass.

“The kids loved being good stewards by helping plant grass,” said Leslie Wiles, a teacher at the middle school. 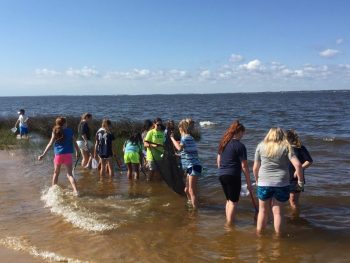 The students pull nets through the water and explore their findings.

During the second half of the day, the students learned about the sand dune and forest habitats of the park, including a lesson on the Eastern Box Turtle, which is North Carolina’s state reptile.

They also learned about other animals that depend on the sand dune and maritime forest while viewing artifacts that the park uses for education. Students were able to participate in a predator activity that helped them understand the advantages of camouflage.

Stormwater runoff, which is the top polluter of coastal waters, was incorporated into the habitat lesson. They learned about how natural habitats can protect water quality from stormwater runoff and other sources of pollution. This led into a lesson on marine debris.

“They enacted a scenario of how sources of pollution can accumulate on our coast, including trash and litter, and how the students’ behaviors can make a positive difference in keeping our coast clean from debris,” Hallas said.

Wiles said she appreciated the opportunity for the students to have such a great learning experience.

“All of these stations were very informative and link directly to our sixth-grade science curriculum,” she said. “I personally like that the kids were in their own natural environment learning about the area in which they live.”