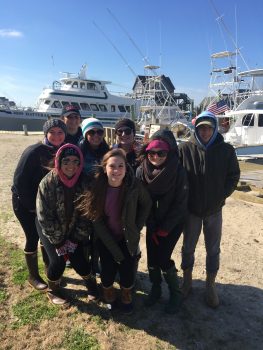 At this year’s Hatteras Island Oyster Roast, the cold temperatures and steady northeast wind at Oden’s Dock didn’t deter anyone from attending, as approximately 400 people showed up to eat oysters, volunteer and enjoy live music — all while giving back to the coast and Hatteras residents affected by this fall’s hurricanes, particularly by Hurricane Matthew.

“Hatteras was hit particularly hard this year,” Hallas said. “And they have been such wonderful partners and champions of the federation over the years, so we wanted to give back.”

The church has a list of 60 people who are still displaced from their homes due to hurricane damage. The donation will help with necessary repair costs and other essential needs to allow them to move back in.

The other half of the proceeds will benefit the federation’s education and restoration programs in the Outer Banks.

The federation has hosted the oyster roast since 2014 in Hatteras. This year, the Outer Banks Visitors Bureau sponsored the event and awarded the federation a grant to help offset the costs.

Most of the Dare County commissioners attended the oyster roast, as did state Rep. Beverly Boswell and Sen. Bill Cook.

Hallas said that despite the cold, there was plenty of sunshine and warm food for people to eat. Attendees devoured more than 60 bushels of North Carolina oysters and plenty of clam chowder. 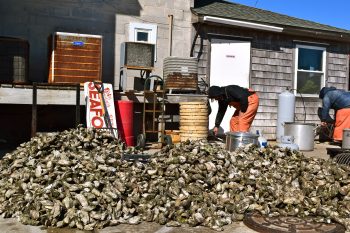 Oysters from the event.

Ernie Foster, long time Hatteras resident and federation board member, was very pleased with the turnout and support from the community.

“The Coastal Federation does a better job than anyone promoting good stewardship of the environment,” he said.

Daniel Pullen, a local professional photographer, took photos at the event, which can be viewed here.

Check out the federation’s live video from the oyster roast on our Facebook page.