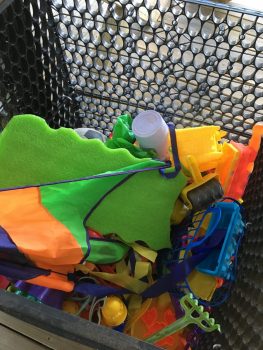 Beach toys — overall, they seem pretty harmless. But when left behind, these plastic toys can harm or even kill marine life.

Visitors to the office dropped off toys in the bin, as did federation staff members. The office was a convenient drop-off point thanks to its proximity to the beach.

Plastic litter — including toys — harm marine life at all levels. Plastic pieces can cut or trap birds, turtles, marine mammals and other animals. They also cause problems if an animal ingests them, resulting in malnutrition or starvation.

Plastic has also been accumulating in the food web. Plankton species, which are responsible for turning carbon dioxide into oxygen and serve as a food source for several animals, are crucial to the health of marine ecosystems. As plastic makes its way into plankton, it is having a detrimental effect on upper trophic levels when predators prey on animals that have ingested plastics. Plastics also leach chemicals into the ocean, preventing vegetative growth and harming nursery habitats.

Raising awareness and collecting discarded toys is an important step in decreasing the amount of plastic reaching the ocean. Nina Quaratella, an AmeriCorps member at the Wrightsville Beach office, said by the end of the summer, the federation’s bins were overflowing with toys.

“We collected a lot of toys — we never counted them, but people really participated,” she said. “The black bin was full by the end of the summer, and we started allowing students to just take toys they wanted after education programs because it was overflowing.”

Many people around the world have come up with creative uses for discarded beach toys. Artists have used them in sculptures, and they are often used in education programs. Plastic Ocean Project, Inc. has an expo in downtown Wilmington that showcases art made from discarded toys.

Bonnie Monteleone, executive director of Plastic Ocean Project, Inc., will be picking up the remaining toys in the near future.

Quaratella said the federation plans to do the project again this summer.

Check out some of the art pieces made with discarded plastic beach toys.

Learn more about our efforts to remove marine debris.