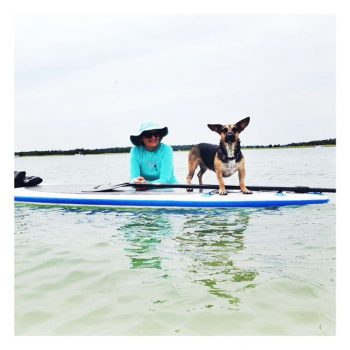 Skrabal and her dog, Goose

Tracy Skrabal, a coastal scientist and southeast regional manager at the North Carolina Coastal Federation, was named “Woman of the Year — Local Hero/Beach Culture” by the Wrightsville Beach Museum of History last week. As part of that recognition, she will be inducted into the Wrightsville Beach Waterman Hall of Fame.

Mike Giles, coastal advocate for the federation, nominated Skrabal for her devotion to the coast. Skrabal said she is grateful and humbled by the recognition and is glad it brings awareness to the federation’s work.

“I grew up on the Chesapeake Bay around watermen, so to be included in that tribe is a real honor,” Skrabal said when asked what her reaction was when she learned she had been recognized. “I think it also brings great awareness to the work the federation does. We are incredibly fortunate to do what we do and to work with people from all walks of life to accomplish our mission.”

Skrabal grew up in Virginia Beach, where she spent lots of time on the water and once went an entire summer without wearing shoes as part of a contest with her brothers.

“I grew up with a foot in the ocean and a foot in Chesapeake Bay,” she said. “So I chose a path that would allow me the luxury of making my career around my passions, and my passions include our oceans, estuaries and clean water.”

She wanted her family to grow up with that same understanding and passion, and she said spending time in the water is something they’ve always done together.

Skrabal has worked at the federation since 1996, and most mornings before work, she goes out and surfs, swims or paddles. Giles said she often shows up early to work with her hair soaking wet, carrying her surfboard.

“Sometimes I joke with her I’ll have to mop the floor after her,” he said.

Skrabal is committed to advocating for the coast and getting others to love the coast and to want to protect it as much as she does.

“I have a real affection for helping kids experience this coastal life that we have and getting them to appreciate that,” she said. “That is why we’re here, to pass that joy to the next generation, who will inherit the responsibility of protecting our coast.” 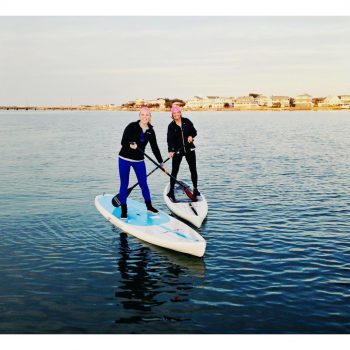 Skrabal and her daughter, Leah

Skrabal said many children in coastal communities don’t have the opportunity to get out and play in the marsh or get their feet muddy, and she feels fortunate to work somewhere that gives kids that opportunity.

“I just love to see kids get excited about learning, and we’re fortunate because it’s really easy to get excited to play in the marsh and pull seine nets,” she said. “Kids really inspire me because kids now who are five, six, seven-years-old already appreciate the coast and are advocates.”

According to a press release from the museum, Skrabal received the award for her kindness, commitment to the coast and work with students.

“She is a recognized leader and sought after community activist who supports many causes that relate to our beaches, clean water, community inclusiveness and beach access,” the press release stated.

The Waterman Hall of Fame honors individuals who have made “personal contributions to the culture of water sports throughout the history of New Hanover County Beaches” and “represent sportsmanship both in and out of the water.”

Each year, the inductees are honored at a ceremony at the Blockade Runner in Wrightsville Beach. Skrabal will be honored on Sept. 25.

“She is just an all-around good person,” Giles said. “She cares a lot about people and she really, really cares about the coast, not just in a scientific or environmental sense, but about the coast being a part of her and of her family.”