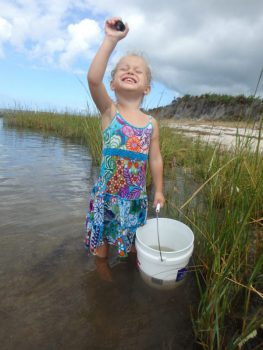 A young girl holds up a hermit crab she found during a living shoreline tour at Durant’s Point.

Visitors and residents alike joined the North Carolina Coastal Federation on living shoreline tours Saturday at Day at the Docks in Hatteras.

Some had never heard of a living shoreline before, but almost all of the people who attended the tours enjoyed getting in the water and using dip nets to look for various marine animals.

“Just about everyone waded in the water using dips nets and a few tried out the seine net, and everyone enjoyed learning about the animals that ‘live’ in the living shoreline,” said Erica Connery, the Americorps member at the federation’s Wanchese office.

The federation hosted tours of the living shoreline at Durant’s Point, a short boat ride away from the main event at Day at the Docks. Staff also set up an education booth so people could learn more about estuaries. Sept. 17-24 is National Estuaries Week.

Day at the Docks celebrates the Spirit of Hatteras and the strength of the community, heritage and traditions of working watermen. The event featured live music, food, crafts and other activities.

Connery led three of the four tours to the living shoreline. She said that participants ranged from a family that had just moved to the area to folks on vacation, all of whom enjoyed learning about estuaries and getting to see a living shoreline firsthand. 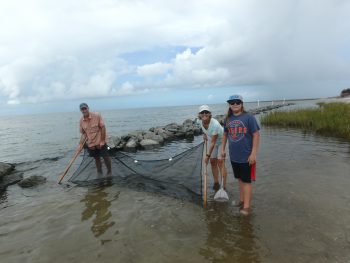 Participants pull a seine net to check out the animals living in the estuarine habitat at Durant’s Point.

The free boat rides brought people across the channel to Durant’s Point — a fragile area on one of the barrier islands where the federation installed a living shoreline.

“By offering free tours of the Durant’s Point living shoreline we were able to show them one of our projects up close in a way that cannot be described with words and pictures,” Connery said. “The Day at the Docks event was all about the community coming together and learning about the seafood industry and the coast as a whole, and our shoreline tours fit right in with that.”

This particular shoreline is meant for erosion control and providing estuarine habitat for juvenile fish, crabs and other species. Hermit crabs were especially popular during the tours, Connery said.

During one tour, a boy had collected a bucket of hermit crabs, which the group released before heading back across the channel. The participants left with a better understanding of how living shorelines both protect the shore and provide habitat.

“It really helped (participants) understand how the shoreline differs from hard structures, like bulkheads, and works to reduce erosion and provide important habitat,” Connery said.