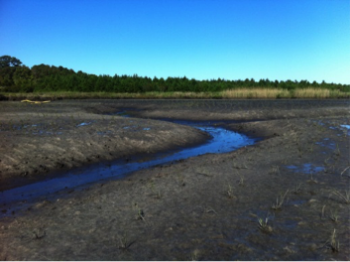 Recently, several volunteers got their hands dirty in an effort to improve water quality and restore habitat at the North River Wetland Preserve. The volunteers, many who had never met before, joined together as a team and planted 2,850 marsh grasses near the muddy shores of Ward Creek.

Ward Creek, which starts within the preserve, soon finds its way into the North River and Core Sound, prime sites for both fishing and shellfishing. Volunteers planted the salt meadow hay and black needlerush grasses in a newly restored 3-acre salt marsh adjacent to the creek. The marsh grasses will help to capture, filter and reduce the flow of agricultural pollutants entering downstream waters. The project was funded through a North Carolina Department of Justice Environmental Enhancement Grant. 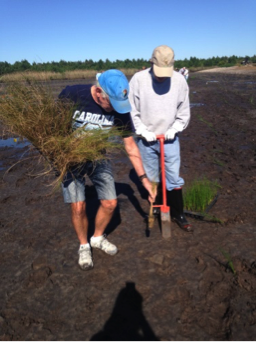 North River Wetland Preserve is a 6,000 acre site located in eastern Carteret County that contains the headwaters of several tidal creeks that drain into the Core Sound. It was previously known as North River Farms and was used as farmland from the 1980s until 2014. The site lies between Open Ground Farms, a current 60,000 acre farm, and the North River.

Since 1999, the federation has been working with numerous partners to obtain, preserve and restore sections of the farmland so it can be used as a buffer from agricultural runoff. The goal is to return the farmland back into its original forest, freshwater and tidal wetland habitats in order to improve water quality in degraded downstream estuaries.

So far, roughly 3,000 acres have been restored, and 1,200 acres of existing forest and marsh land have been preserved. Restoration of the remaining acreage is expected to be complete within the next few years. The support of local volunteers and community partners helps to keep this project running, and we are grateful for the time and effort contributed by those on a sunny day in October.

Check out our event calendar for future volunteer opportunities in your region.