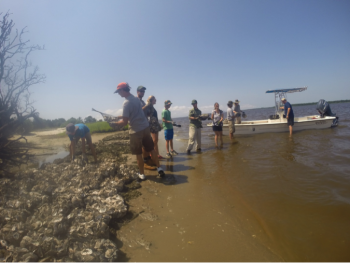 Oysters were once plentiful in the lower Cape Fear River. They formed extensive reefs and lined the marshy shoreline of this dynamic river. Major alterations to the Cape Fear River in the last century resulted in a severe decline in the oyster population.

The federation has partnered with Carolina Beach State Park, Military Ocean Terminal Sunny Point, the N.C. Division of Marine Fisheries and hundreds of community and GE-Wilmington volunteers on a multi-year effort to help restore oyster and salt marsh habitat in the lower Cape Fear River. The project partners kicked off the effort with a Living Shoreline project along the park’s river shoreline to protect the salt marsh and provide habitat for oysters and the associated reef dwelling organisms. This is just the start of the effort to bring these waters back to their original state, helping not only the river, but the economy as well.

As coastal education coordinator for the federation, Ted Wigis explains, “Oysters are intricately connected to the health of our coastal ecosystem. They are not just great to eat and important to fisherman, they are critical components of our state’s estuaries and economy.”

In a recent interview on the subject of oysters and the federation’s restoration efforts by Focus on the Coast magazine, Wilgis further explains the benefits of oyster restoration.