The week before Hurricane Florence landed on the North Carolina coast, staff and volunteers in the federation’s Northeast office spent an afternoon monitoring an oyster restoration site on the southern end of Roanoke Island, near Thicket Lump. This 200-foot section of sill was initially built three years ago and is monitored at least once a year to determine if new oysters have established and to see how fast they are growing. 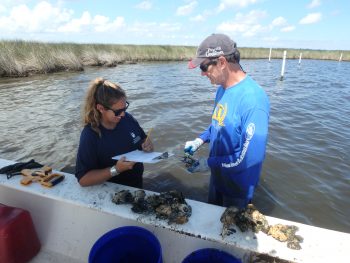 This site was created using two different materials, oyster shell bags and upcycled crab pots. The materials alternate every 50 feet along the reef. Throughout the monitoring process, three bags were selected at random from each of these 50 foot sections. For the oyster shell bag areas, the bags were opened to count and measure the live oysters. After all measurements were recorded, the oyster shells were re-bagged and placed back on the reef. A similar monitoring approach was used for the crab pot sections. Three pots were chosen at random and all live oysters were counted and measured on each face of the pot.

Measurements of the overall reef structure were also taken to determine the height of the reef.

Staff and volunteers observed a good amount of oyster growth, a great sign for the health of this habitat. They also observed fish and crabs making use of the area. The results from the monitoring were entered into an electronic data sheet for more detailed analysis, including comparing the results from previous years. 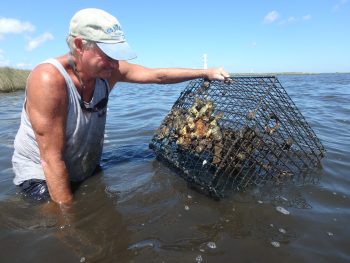 “We are so thankful to our volunteers who helped us to monitor this reef,” said Erin Fleckenstein, regional manager and coastal scientist in the Wanchese office. “We saw good oyster growth and look forward to seeing this reef grow and build more oyster habitat over time.” 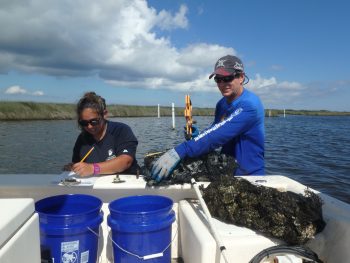 This location was one of three sites made in a similar manner around Roanoke Island. As this is the southernmost site and closest to the nearest ocean inlet, it typically has the highest salinity. High salinity is a favorable condition for oysters to grow more rapidly compared to lower salinity sites.

Check back for additional findings and updates from other oyster monitoring projects.