The workshop — led by Dr. Lexia Weaver, coastal scientist, and Rachel Bisesi, coastal education coordinator — was designed to give an overview of what living shorelines are, how they work and how to obtain permits for them. 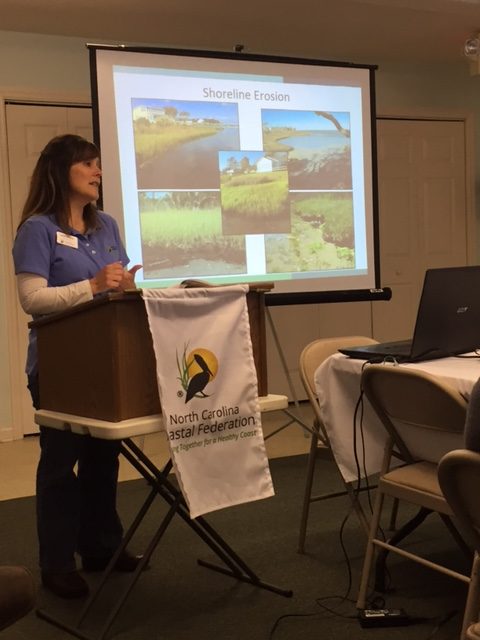 Dr. Lexia Weaver gives an overview of what shoreline erosion looks like and what it means for habitats and resiliency.

“Though shoreline erosion is natural, it has increased significantly in the last 20 years due to the increased frequency and intensity of storms, sea level rise and human interactions, such as boat wakes,” Weaver said. “Because of this, we want to get the word out about how living shorelines can help control erosion while also protecting coastal habitats.”

The traditional way to handle shoreline erosion has been to build bulkheads and other hardened structures, but bulkheads frequently lose strength over time and require repairs or entire replacement. They also harm and eventually destroy the salt marsh and oyster habitat waterward of them. Living shorelines, on the other hand, become stronger with time – marsh grass grows and spreads, and oyster reefs encourage new oyster growth, both of which slow down wave energy. Weaver also cited studies finding that living shorelines stand up better to storms than bulkheads.

The group learned about the various types of living shorelines and how they’re designed, the permitting process and the costs of salt marsh plants and recycled oyster shell bags. The workshop also served as an information exchange, as waterfront property owners were able to learn from and talk to living shoreline professionals.

“Picking an erosion control option can be difficult if there isn’t enough information available to people, and with living shorelines being relatively new compared to other options, there’s not many places to find the information,” Weaver said.

Josh Merritt and Grainger Coughtrey, contractors from Carolina Silvics who have been hired by the federation to assist with living shoreline projects, were two of the living shoreline professionals at the workshop. They answered questions and helped explain the building process.

Dr. Neils Lindquist, president of Sandbar Oyster Company and professor at the UNC Institute of Marine Sciences, also presented at the workshop. He gave an overview of how sea level rise has sped up in recent years, which is leading to increased erosion. 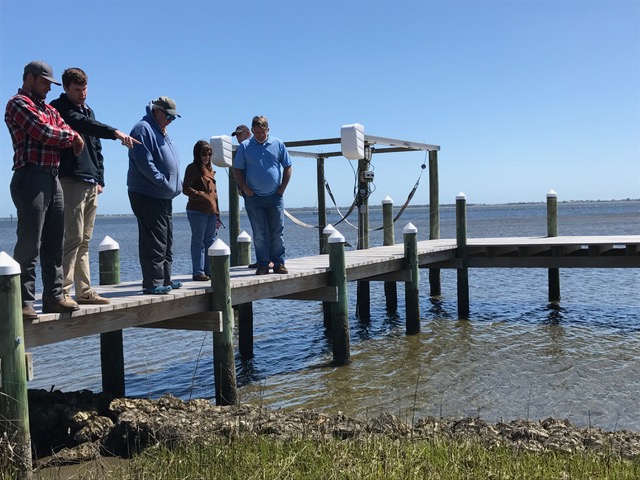 The workshop participants took a trip to a nearby private living shoreline and were able to talk to living shorelines professionals, including scientists and contractors.

Lindquist and David “Clammerhead” Cessna, co-founder of Sandbar Oyster Company, have developed an innovative, patent-pending biodegradable oyster substrate called OysterCatcherTM that can function similarly to the plastic mesh bags that are currently used for living shorelines, but will instead break down over time. The federation is teaming up with Lindquist this spring to test the material for living shorelines at the North Carolina Aquarium at Pine Knoll Shores.

After the living shoreline information session, the group took a field trip to neighboring living shorelines on Bogue Sound. The group was able to get an up-close look at the salt marsh grass and oyster reefs that are protecting the shorelines from erosion.

Bisesi said that the workshop was a success and there are more workshops planned for the future.

“The workshop was a great opportunity for them to learn, ask questions, hear from contractors and get an up-close look at a living shoreline,” Bisesi said. “The homeowners were very interested in living shorelines, and we hope that they spread the word to other waterfront property owners.”