The North Carolina Coastal Federation hosted three marine debris cleanups in January to kick off its 2018 marine debris work and to celebrate the Lost Fishing Gear Recovery Project, a statewide effort to pick up lost crab pots from North Carolina sounds during the no-potting period.

From 2014-2016, the federation received funding from NOAA to hire commercial watermen to recover lost crab pots from northeastern North Carolina coastal waters during the no-potting period when all crab pots must be out of the water due to fishing regulations. Pots typically end up lost as the result of large weather events. Lost pots can become hung in man-made structures such as bridges, or they can drift into channels over time, increasing the likelihood of buoy detachment by vessel traffic.

As of January 2017, this project has expanded statewide to all three Marine Patrol districts thanks to ongoing funding from the General Assembly. During the 2017 project, a total of 4,304 pots were removed by 72 watermen along the coast. Learn more about the 2017 project from this video by Chris Hannant of Swell Productions. Stay tuned in early February for an overview of this year’s project.

Check out more information about the three regional cleanups below. Thank you to the 138 volunteers who joined us along the coast! 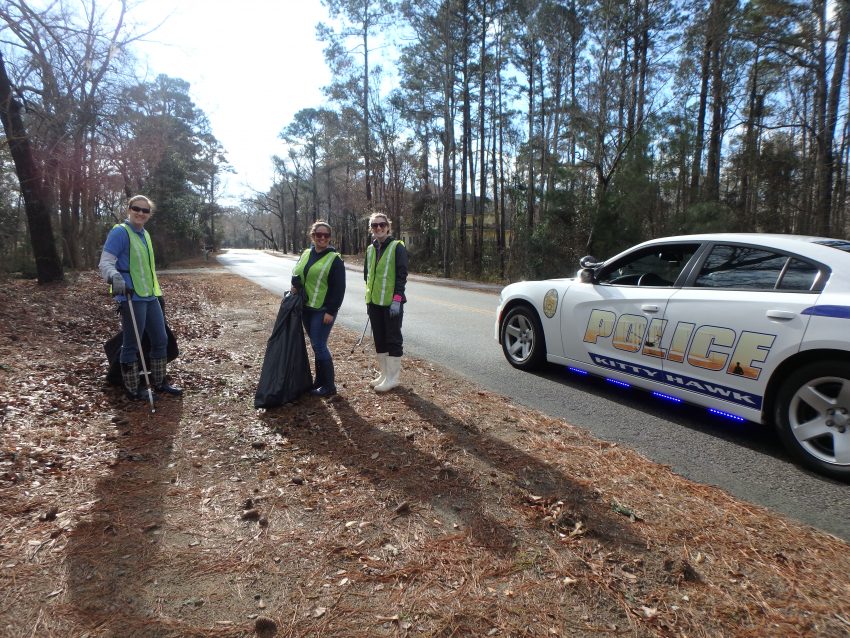 The police officers escorted the volunteers down Woods Road.

The federation’s Wanchese office hosted a cleanup on Jan. 13 at Kitty Hawk Woods, which is managed by the North Carolina Coastal Reserve. Forty volunteers collected an estimated 1,500 pounds of trash made up of 30 bags of trash, 14 fish totes of recycling, 14 tires, a truck bed liner and a piece of toilet.

The volunteers cleaned up various areas of the woods including an old dump site. Once the volunteers began picking up the visible debris, they found layers and layers of trash bags underneath the dump site. They also cleaned up both sides of the highway on Woods Road with assistance from the Kitty Hawk Police Department. After the cleanup, the group headed over to Barefoot Bernie’s where they were given a discounted lunch.

A group from the North Carolina Aquarium on Roanoke Island joined the federation for the cleanup as well as the town of Kitty Hawk staff and police officers.

“We had tremendous support from the Town of Kitty Hawk, including Mayor Gary Perry and Andy Stewart, town manager. The town’s public works staff helped haul off the debris and sort it during the event,” said Sara Hallas, coastal education coordinator for the federation’s Wanchese office. “It was very impressive. The mayor showed up with his waders slung over his shoulder, and I knew we were blessed with a community that meant business.”

“Not only did volunteers remove debris and trash from the freshwater wetlands, they reaffirmed their commitment to protecting and maintaining public natural areas,” she said. “The cleanup also highlights the success of public-private partnerships to accomplish mutual goals.”

Thanks to all the volunteers that helped cleaned up the #KittyHawkWoodsReserve with the @NCCoastalFed this weekend! (Photo: NC Coastal Federation) #MyReserveOurCoasts pic.twitter.com/Uu5BfVWYYE 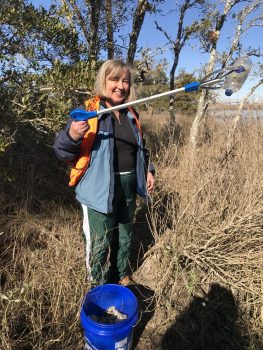 Eighty volunteers helped out at the Ocean office’s cleanup at the Hoop Pole Creek Preserve in Atlantic Beach on Jan. 20.

The volunteers moved quickly along the trail, clearing debris that ranged from plastic bottles to planks of wood. They also helped clean the area bordering the parking lot at the Atlantic Station Shopping Center.

The group collected 20 bags of trash and more than 1,000 pounds of washed up wooden debris. The federation has managed the 31-acre Hoop Pole Creek Preserve since 1997, when it purchased the land from the town using a grant from the N.C. Clean Water Management Trust Fund. The land had been slated for development but has instead remained one of the last natural areas in the town.

Volunteers from the Parrothead Club joined the efforts, as did students from the National Charity League, East Carolina University and Duke University.

Thanks to @NCCoastalFed for hosting an amazing Shoreline Cleanup yesterday at Hoop Pole Creek! We had a great time helping clear out trash and hauling all that lumber out of the water! pic.twitter.com/keEAmoBptG

Rachel Bisesi, coastal education coordinator for that region, spoke with WCTI Channel 12 about the cleanup and the federation’s crab pot project.

“We are always grateful for the community support we see every year at this cleanup. It’s great to see so many people out on a Saturday morning helping to clean up their community,” Bisesi said. 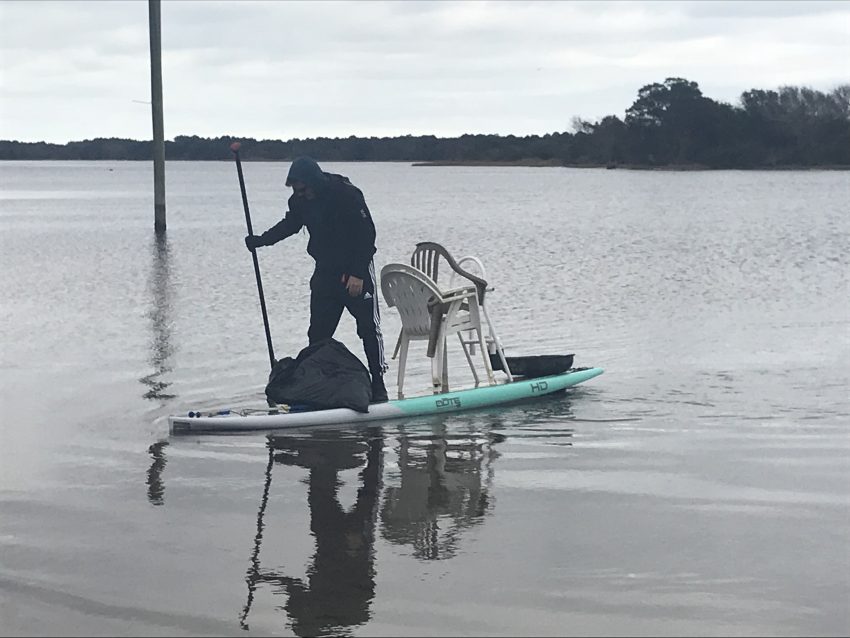 Volunteers paddled to Permuda Island, where they found camping gear.

The volunteers collected more than 1,000 items and tracked them with University of Georgia’s Marine Debris Tracker. The top five items collected were 242 glass bottles, 183 aluminum cans, 160 plastic bottles, 113 plastic or foam fragments and 105 plastic food wrappers, demonstrating that plastic makes up a large chunk of debris that gets into our waterways and onto our shorelines.

During the cleanup, some of the volunteers paddled over to Permuda Island, where they found a lot of abandoned camping gear.

“We are always thankful to our eager volunteers who braved the cold and once again joined us for our January cleanup,” said Jessica Gray, coastal outreach associate for the federation. “Their work helps us keep Morris Landing clean for visitors that use it throughout the year.”

The federation partnered with North Carolina Coastal Reserve and Keep Onslow Beautiful for this cleanup.

Thank you to the volunteers who joined us at Morris Landing last Saturday for a shoreline cleanup! Check out this @JDNews photo gallery from the event. https://t.co/eB2cQ8qfzB