The North Carolina Coastal Federation submitted comments to Dave Hallac, the superintendent of Cape Hatteras National Seashore, on Nov. 1, 2016, in regard to the flood mitigation management planning process for the national seashore’s Cape Point area that is near the iconic Cape Hatteras lighthouse. 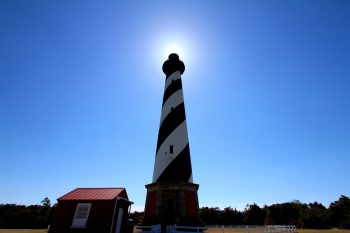 The national seashore held two public meetings in October to address the chronic flooding that occurs in the area.

During the comment period, which ended on Nov. 4, the national seashore sought to “evaluate the best available information on the hydrology and elevation in the flood-prone areas and evaluate options for flood mitigation,” according to the National Park Service website.

In the letter, the federation points out the flooding issues at the campground that have gone on for decades. A study that was referenced at a meeting during the public scoping period concluded that the campground’s flooding problems result from the hydrology of the area, including the rise of the water table during wet periods.

The federation also points out that the campground is already in need of upgrades. The campground could be elevated with fill or moved to a higher location, which would be a long-term solution to the issue of the rising water table.

The Park Service is also considering groundwater management solutions that would “create a drainage system that would prevent the water table from reaching its seasonally high levels.” Since draining excess water directly into the ocean is illegal and can result in swimming water impairments, another viable solution would be to create a stormwater infiltration system in the nearby dunes. Before the Park Service can move forward with this solution, it would need to conduct and interpret the results of a hydrologic analysis.

The federation is in favor of moving the campground as an option for campground control because this takes into account the long-term effects of sea-level rise. However, if this solution is cost prohibitive or otherwise not feasible, then the Park Service should take the next necessary steps in pursuing a dune infiltration system.

Those interested in learning more about this ongoing issue can learn more about the issue on the National Park Service’s website here. Read the full comment letter here. For questions about the federation’s position on this matter, please contact Ann Daisey at 252-473-1607.