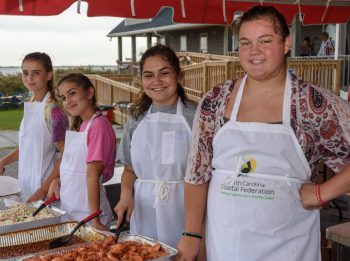 The first annual Fish Fry & Shrimp Boil started with an idea that it might raise awareness about the North Carolina Coastal Federation in the northeast coastal region. The federation was looking to bring people together and to build partnerships within the community.

“We thought fish and shrimp might do the trick,” said Sara Hallas, coastal education coordinator for the region. “And it did.”

The fish fry is still going strong, as the federation hosted the fifth annual event last Friday in Wanchese. It’s grown a lot over the years, drawing approximately 250 people this year despite the drizzly weather.

As always, the fish fry celebrated the region’s local waters and people who love them and featured locally-harvested seafood. Attendees also enjoyed live music by the Alligator River String Band, as well as family activities. Staff drew the winner of the paddleboard raffle; City Beverage Company in Elizabeth City and Sweetwater Brewing Company donated the 12-foot board.

Hallas said the event has become established in the area and is something that folks look forward to each year. And, she added, she and the rest of the staff have become more polished event planners. 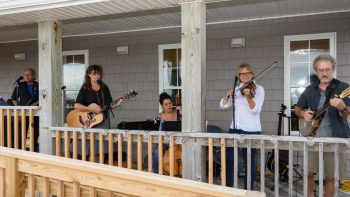 “My favorite part about the fish fry is the way it brings everyone together,” Hallas said. “I admire the way it brings such a variety of folks to enjoy fresh local seafood and appreciate the clean habitats where it was harvested — from our long-time members and volunteers to business partnerships new and continued, elected officials and politicians, local students and families.”

This year, the event was at the federation’s new office in the Wanchese Marine Industrial Park, where the federation is now working alongside commercial fishermen, recreational boat-builders and fishing suppliers — some of the people and businesses that most rely on clean waters. Staff officially moved into the new office in August and hosted a grand opening in September. 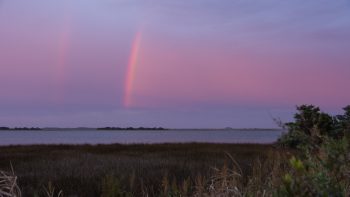 A double rainbow over Broad Creek. Photo by Bill Birkemeier.

The federation is also thankful for the support of local businesses that have supported the fish fry over the years. Full Circle Crab Company of Columbia has sourced and supplied shrimp every year, while City Beverage Company has supplied beer. Kelly’s Outer Banks Restaurant & Tavern of Nags Head has donated items each year, and Sanctuary Vineyards has provided wine most years. Finally, the Outer Banks Brewing Station of Kill Devil Hills has also made donations over the years, and Barefoot Rentals and Bridal Events provided tables for this year’s event.

“We could not hold this event without this tremendous support from the community,” Hallas  said. “Considering everyone’s different role in the community, this event helps remind us we all have something in common: respect and appreciation for the North Carolina coast.”