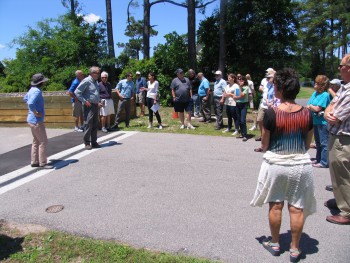 Tracy Skrabal, left, and Larry Sneeden, a senior civil engineer with AECOM who helped with the project, talk about the benefits of an infiltration trench in a driveway on NE 19th Street in Oak Island

The North Carolina Coastal Federation hosted a meeting and tour for the Cape Fear Chapter of the American Society of Civil Engineers on May 24 that focused on stormwater runoff solutions in Oak Island. Engineers, public officials and residents alike showed up to learn more about about stormwater runoff reduction measures the town has implemented. The walking tour, which attracted a crowd of around 45 people, showcased projects along various streets, creeks and parks.

In order to decrease runoff from roads, the federation and the town teamed up to add swales on the sides of roads that are designed to infiltrate the stormwater. Before these swales were installed, most of the stormwater runoff ran down the roads and straight into waterways, a practice which is fairly typical within many towns and cities.

In addition to the streetside swales, participants learned about several other stormwater projects within Oak Island, including rain gardens, living shorelines, pervious pavement and an infiltration trench. Each of the projects involved relatively inexpensive, simple retrofits that can divert and infiltrate stormwater runoff before it reaches storm drains and surface waters.

Over a one-year period, there was a 77 percent reduction in stormwater runoff as a result of the streetside swales. A total of 66,400 cubic feet of runoff entered the swales and 51,430 cubic feet of this runoff was infiltrated. In other words, 384,700 gallons of stormwater were infiltrated by the swales. If these techniques are replicated throughout the streets of Oak Island, stormwater reduction measures such as these could result in remarkable improvement in Oak Island’s stormwater runoff problems.

In addition to federation staff and Oak Island town officials, the event also drew town officials from Pine Knoll Shores and Sunset Beach who were interested in learning about measures they could take to reduce stormwater runoff in their towns.

The project is funded by a grant from the Environmental Protection Agency designed to provide funding for stormwater retrofits under Section 319 of the Clean Water Act, called the Non-point Source Management Program. Part of the funds must go toward education and outreach. Many volunteers helped with the runoff measurements, as the project is designed to “engage community stakeholders to build support, participation and ownership of results,” according to a presentation from Tracy Skrabal, Coastal Scientist at the federation.