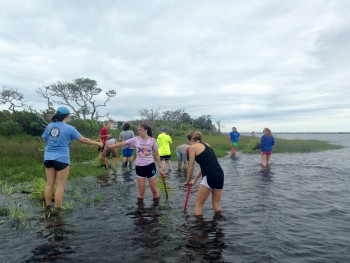 Planting cordgrass helps prevent erosion at Sanders Point, a worship area at Trinity Center. The center, which is the worship, retreat and education center for the Episcopal Church’s Diocese of Eastern North Carolina, hosts school groups for environmental education programs during the school year through the Sound to Sea Program. Students get hands on experience in protecting the coast.

Sanders Point had been eroding in recent years due to storms, and in 2013, Trinity Center and Sound to Sea staff reached out to the federation about building a living shoreline. They requested and received a permit that year. The groups, along with volunteers, completed construction of a sill made of bags of recycled oyster shells in 2014, and visiting school groups have continued to plant more smooth cordgrass.

Volunteers use a dibble bar to create a small hole in the marsh sediment and then place the salt marsh plugs inside each hole, pulling the bar out simultaneously to help the smooth cordgrass be pulled into the ground. The plants help to hold the sediment together, thereby helping to reduce shoreline erosion. They also provide valuable estuarine nursery habitat and help to improve water quality.

Living shorelines create buffers that absorb wave energy, allowing a shore to slowly build up, and they provide habitat and food for animals in addition to filtering the water. They are a valuable and less expensive alternative to hardened structures, like a bulkhead, which can ruin existing marshes and eventually have to be replaced.

This planting was the third so far this year at this site, and the project is funded by a grant from the National Oceanic and Atmospheric Organization (NOAA).