Shore Stories Screened Throughout the Coast

Shore Stories Screened Throughout the Coast 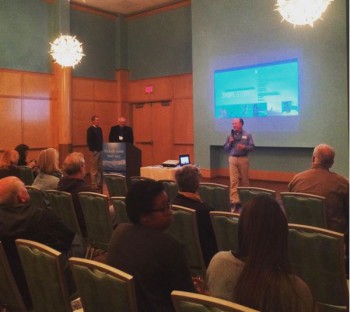 Local chapter leaders and community members gathered at the Blockade Runner to view the series on the fight against offshore drilling and discuss the future of offshore activities. The series consisted of six short stories concerning local efforts against drilling and damage from the Deepwater Horizon spill. Viewers described the films as, “compelling, powerful, and moving.” Several of the stories focused on personal impacts to locals from the Deepwater Horizon disaster. One guest commented, “It was eye-opening, I did not know about the loss of mangroves or nesting sites for endangered birds.”

Guests heard from members of local advocacy groups who thanked them for their contribution to the effort to stop offshore drilling. Leaders encouraged community members to remain active in writing to legislators voicing their opposition to seismic testing. The event was an enjoyable celebration of the recent good news and an opportunity to refocus efforts to better protect our coastlines in North Carolina.