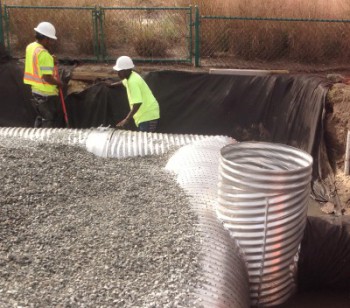 The town’s latest stormwater reduction initiatives have cut the amount of stormwater pollutants coming from one pipe dumping directly into Banks Channel by 90 percent.

“The amount that it cut down was just really remarkable,” said Mike Mallin, a research professor with the University of North Carolina at Wilmington’s Center for Marine Science. “We were really, really impressed by that.”

Financially backed by a National Estuarine Research Reserve grant, the town, with the collaboration of UNC-Wilmington and the N.C. Coastal Federation, has been successful in finding ways to control stormwater runoff.

Last November, the town had a metal infiltration device installed beneath the ground at the end of a pipe along Iula Drive on the south end of the beach. Stormwater flowing through the drainage pipe filters through little holes and funnels into sand before heading into Banks Channel, where several stormwater pipes dump directly into the waterway.

Researchers rigged the outflow pipe with tools that measure the amount of flow going into the pipe and collect samples for fecal coliform and suspended solids, which are indicators of water quality.

“Instead of discharging directly into Banks Channel it leaks into the sand,” Mallin said.

Engineers designed a series of small techniques in the center of town to filter stormwater collected from several streets and parking lots that flows into Lee’s Cut.

“In the center of town we weren’t able to control all of the runoff that’s going in there because we were simply limited by the amount of funds, but it controlled about 50 percent of that area,” Mallin said. “In general, pretty much everything that runs down through the ground there is cleared out. We’ve got really, really high levels of control coming out of there.”

A rain garden at the end of Seawater Drive now collects stormwater once diverted into a drainage pipe.

“That runoff used to go down the pipe and out and now it’s gently filtered down into the soil where it’s cleansed of pollutants,” Mallin said. “When you have so much of the impervious surface here and so much of it is connected to each other it’s just allowed to go straight into these waterways. These techniques clean stormwater of the pollutants.” 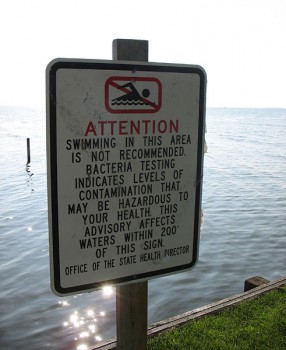 “If we can stop the closures on the Banks Channel side it would be great,” he said. “Hopefully we can do more of those projects like we’ve done on Iula. It’s a huge influence. Hopefully it will get better and better.”

In August 2007 the town contracted with the university to conduct a study to help identify the source of bacteria causing the swimming advisories for portions of Banks Channel.

The study, conducted by Mallin, found that stormwater runoff was among the greatest contributors to contamination. Animals, primarily birds, were also major contributors.

With nearly 650 stormwater inlets that collect runoff and direct it into local waterways, the town has been seeking projects to reduce polluted runoff.

Five, 3,000-gallon cisterns were built last year to capture and reuse rainwater from the town’s police and fire stations. Water collected is used to irrigate one of the town’s recreational fields and wash town vehicles.

The town owns a little less than half of the storm drain pipes, inlet structures and outfalls. The rest are owned by either the N.C. Department of Transportation, New Hanover County and private property owners.

It’s that last group the town is going to have to rely on to help continue reducing the amount of stormwater runoff in local waterways.

The July 2007 Wrightsville Beach Stormwater Design Manual for homeowners explains the implications from runoff and ways to reduce it, including everything from planting shrubs to installing pervious driveways, rain gardens and rain barrels.

The fact that the federation’s office is in Wrightsville Beach is “quite handy,” he said. It is there where visitors can see firsthand various low-impact development, or LID, projects that prevent polluting stormwater runoff.

“That’s the main thing is to keep the stormwater out of the waterways by reducing the volume and the bacterial load,” Babin said.