For the past year, with the help of the Coastal Advocacy Institute interns, the N.C. Coastal Federation has been working on developing a Watershed Restoration Planning Guidebook. We are proud to announce that the guidebook has been completed and is now available online.

The purpose of the guidebook is to provide clear and detailed guidance for the development of a watershed management plan that aims to replicate the pre-impairment surface water hydrology and improves coastal water quality. The guidebook focuses on North Carolina, but the methods described in it can be applied around the country. 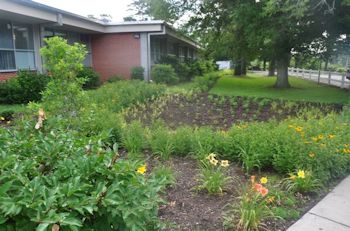 In the past several decades coastal North Carolina has experienced rapid residential and agricultural development that had a two-fold effect on the water quality: It changed natural hydrology causing increased stormwater runoff and it shifted the source of pollution from easily tracked point-sources, like sewer pipes, to almost impossible to track non-point sources, such as runoff. Both of these changes contributed to rapid pollution of coastal watersheds. Today, thousands of acres of shellfish and swimming waters are listed as legally impaired due to harmful bacteria contained in the stormwater runoff. That translates into hundreds of square miles of coastal waters that are closed for their designated uses for harvesting shellfish and need to be restored.

The novel methods and philosophy presented in this guidebook were developed by the federation and used in several coastal watersheds such as the White Oak River and Hewletts and Bradley creeks, for example. Unlike the traditional methods of treating the source of bacteria or the end of pipe treatment of the stormwater, this method focuses on the reduction of the total stormwater volume that reaches the coastal waters. In other words, the guidebook offers a number of low-impact development, low-cost tools and techniques whose goal is to infiltrate the stormwater on the spot instead of letting it run over pavements and through ditches into the creeks and the sounds.

We encourage all local governments that have impaired waters in their jurisdiction to take a look at the guidebook and try to find ways to apply it with the goal of improving the water quality.

The federation would like to thank the 2013 interns  and numerous partners in this project as well as the U.S. Environmental Protection Agency whose funds made this guidebook possible.